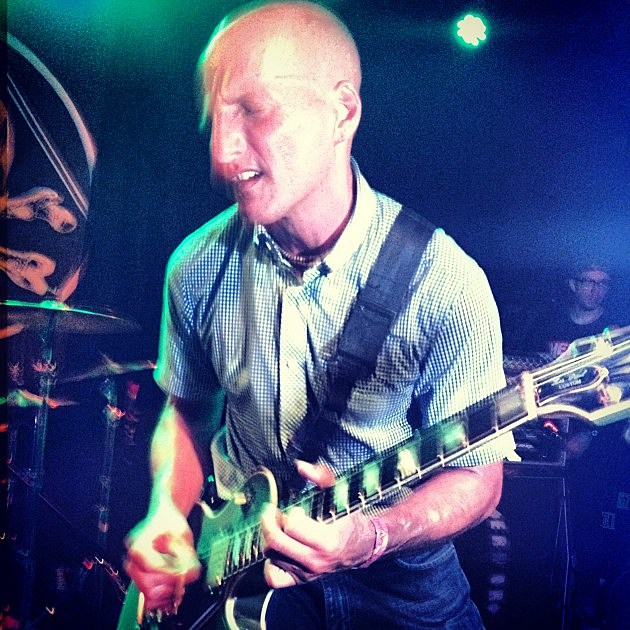 Invisible Oranges sponsored an extremely rare one-off Judge show last Friday (10/11) at Saint Vitus as part of the CBGB Festival. Tickets sold out very quickly, even before Murphy's Law was announced as direct support at the last minute.

We've got a full review of the show over at Invisible Oranges and there are videos of their full sets from the show in this post. From Matt Achstatter's writeup:

"One might find it strange that the party animals of Murphy's Law were paired on a bill with the straightedge warriors of Judge, but it was a great display of the unifying power that music possesses and camaraderie amongst hardcore fans.

The crowd, which included all sorts of NYHC scene legends, were all well aware of what a once-in-a-lifetime experience seeing the original Judge lineup at such a small venue would be. While the bartenders definitely had their hands full, there was no shortage of hands with X's drawn on them in permanent marker and straightedge varsity jackets. After a brief soundcheck, the sounds of rainfall came over the P.A. to let everyone know that there was a storm brewing. Judge proceeded to open up with their track "The Storm" off of their iconic 1989 release "Bringin' it Down, and the crowd was kicked into full stagedive and mosh mode. The band performed their limited but all-killer discography almost in its entirety. Anthony "Civ" Civarelli (of Gorilla Biscuits fame) joined them to perform their famed Blitz cover "Warriors". They closed out the night with an ode to the New York hardcore brotherhood entitled "New York Crew," off their 1988 EP of the same name, joined by guest vocalist Richie Birkenhead (of Underdog/Into Another fame)."

Again, you can check out the whole writeup over at IO.

Judge have another upcoming appearance at Fun Fun Fun Fest, which runs from November 8 through November 10. Tickets are still available. Check out full videos of the Judge and Murphy's Law sets below.