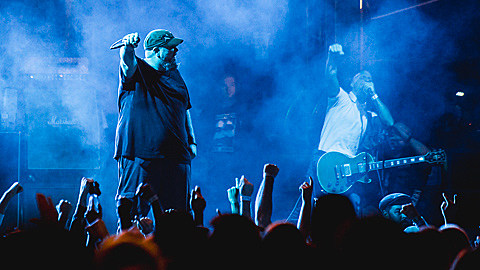 New York hardcore greats Judge's shows are pretty rare these days, though they do play a few a year and they're promising East Coast shows for 2016. So far they announced Albany, Philly, and Cambridge shows and wrote, "Ok East Coast friends. We heard you and we are coming back around in 2016. Let's start with this. Stay tuned for a few other dates." Let's hope they play another hometown show. Their last one was in 2013.

All of those dates are with World Be Free, the new band of Judge drummer Sammy Siegler (also of Youth of Today, CIV, Gorilla Biscuits and more). The whole lineup's pretty impressive, with Terror's Scott Vogel on vocals, Strife's Andrew Kline on guitar, another Gorilla Biscuits member Arthur Smilios on bass, and Joe Garlipp of Envy (the NY band, not the Japanese band) and Despair on guitar. Their debut album, The Anti-Circle, comes out on February 5 via Revelation Records (former home of Judge, Gorilla Biscuits, Youth of Today, etc). From the sound of the two singles, "World Be Free" and "Breakout or Busted," this is right up the alley of those classic youth crew bands that Sammy and Arthur played in. Check them out below.

World Be Free have other dates without Judge, including Brooklyn's Saint Vitus on 2/21. Tickets for that show will be on sale soon. All dates are listed below.