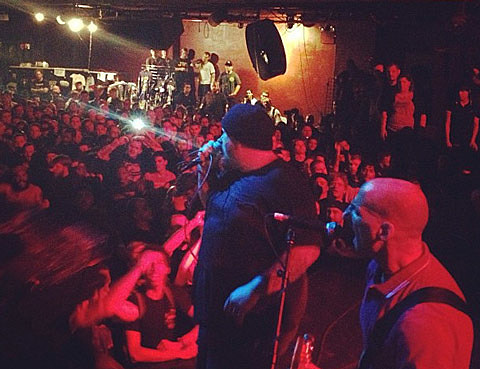 Twenty-three years after breaking up, legendary New York hardcore crew Judge took to the stage to a packed house at Webster Hall last night. The show was their second of two dates at the venue (May 18 & 19), both as part of Black & Blue Bowl with support coming from Breakdown on one night and Madball on the other, with other names like Kill Your Idols, Bane, Black Train Jack, Crown of Thornz and more across the two days. Check out some video of Judge from Webster Hall below, including almost all of their 5/18 set and a rendition of "New York Crew" featuring CIV and Toby Morse of H20.

If you missed Judge, Kill Your Idols, Bane or Black Train Jack, you're in luck. All three, as well as names like Cold World, Trapped Under Ice (last show), Sick of it All, Modern Life is War, Paint it Black, Kid Dynamite and Suburban Scum will play This is Hardcore 2013 in Philadelphia in August. Updated lineup is below and tickets are on sale in different incarnations.

In other NYHC news, in addition to his ongoing Lower East Side walking tours, John Joseph of Cro-Mags will lead a pair of appearances titled "Evolution of a Cro-Magnon - an evening of Reflection, Tragedy and Triumph" to discuss his his life and book. Tickets for both July 10 and 11 at the Krain Theater (85 East 4th St in Manhattan), are still available. Cro-Mags also have a whopper of a show set for Chicago.

Judge videos and This is Hardcore Lineup are below.