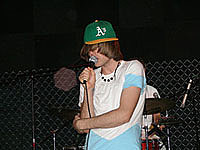 "Nicholas Thorburn (born November 27, 1981) is a Canadian musician who has fronted The Unicorns, Th' Corn Gangg, and Islands. His stage name was Nick Diamonds, but he recently reverted to his birth name." [Wikipedia]

His newest project is called Juiced Elfers, and the only other thing I can tell you about it is that they're playing Mercury Lounge in NYC on Thursday August 23rd @ 7pm - right before a Metric-side project (no advanced tix). I can also tell you that his other band Islands have new recordS in the works, and are confirmed to play CMJ.