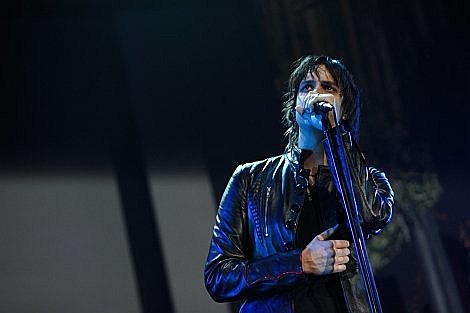 CNN: What was your reaction when NME called "Is This It" the album of the decade?

Casablancas: Unbelievable. I hadn't thought about it, but it's really weird. I like it, though.

CNN: What stood out for you in this life-changing decade?

Casablancas: Probably that: having people or magazines say that your album is the best of the decade. That's not something I ever thought in my wildest dreams.

Julian Casablancas played a five-show run at L.A.'s Downtown Palace Theatre in November. Back then it was reported (by Julian in the NY Times) that he'd be doing a "New York residency" in January, but it looks like he changed his mind. It's been announced that he'll play Terminal 5 on Thursday, January 14th. There's a pre-sale for tickets happening now. Tickets go on general sale Friday, December 11th at noon. More shows TBA?

What about the band with NME's album of the decade?

Julian Casablancas, the front man of the Strokes, told Billboard that the group would headline the Isle of Wight festival in Britain on June 12, alongside Jay-Z; the performance will probably be followed by other summer concert appearances in Europe and North America. "When we meet with the band and talk and play music, it's just a different level of ease and comfort," Mr. Casablancas told Billboard. "Everyone's more easygoing and everyone feels more confident and just trusts each other a little bit." [NY Times]

Hopefully Julian doesn't change his mind about that too.

One of the bonus tracks on Julian's Phrazes For The Young is a cover of the SNL song "I Wish It Was Christmas Today" (it's also a limited 7"). Both versions of the track (videos) and all tour dates (he has a string of Europe/UK shows this December) are below...

I Wish It Was Christmas Today