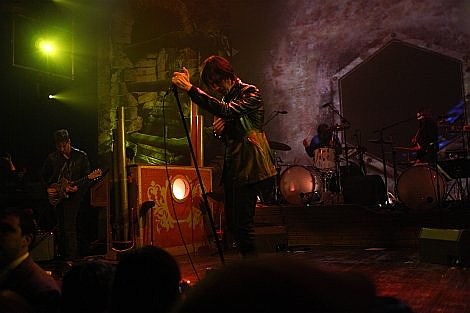 Playing the [HMV Forum on December 15th] with his band - which includes The Strokes' guitar "guru" JP Bowersock - [Julian Casablancas] performed 'I Wish It Was Christmas Today', which is released in the UK on December 21 [and a bonus track on the album].

Before the song Casablancas joked to the crowd he is beginning to reconsider his decision to record a festive song, before admitting he had said the same thing on most nights of the UK tour.

"This is the part of the show when I say my little piece. People who come every night will say, 'He says the same shit every night'," he joked, before addressing his Christmas song. "I like the holidays, but they make me play it, yes it's that one. I already regret it." [NME]

He's in Europe now, but Julian will be in NYC this January - now for two shows. In addition to the Jan. 14th show at Terminal 5, he's added another NYC show at the same venue one day later (January 15th). Tickets for the new show go on AmEx presale at 11am. General sale is Friday, December 18th at noon.

Videos and setlist from that London gig (including the Christmas tune) are below...

Julian Casablancas - I Wish It Was Christmas Today

Julian Casablancas - Left And Right In The Dark