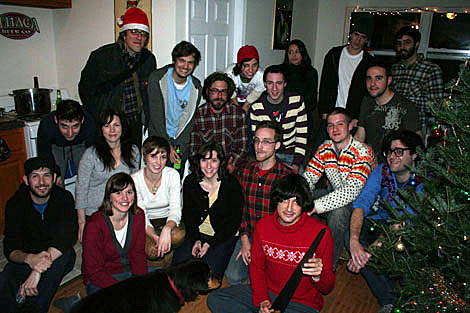 Barnes didn't turn out for the Elephant 6 Holiday Surprise tour earlier this winter, and so far these are A Hawk and a Hacksaw's only announced 2009 dates.

With H&H, there's always the possibility of a Beirut-related appearance, as they've worked & toured together, and are on the same label (Badabing. There's even video evidence of previous collabs (see below). Zach Condon recently appeared unannounced at an Inlets show, and Beirut are playing three NYC shows in February (ahem, for now).

In other NMH-stalking news - a while back BV reported that the Music Tapes Caroling tour would be making its way north from Georgia through New York to Maine playing living rooms and houses along the route. Fans were encouraged to invite "Julian and his friends" to their house. I [Andrew] did so, and strangely enough, on December 13th, Julian, Rudolph (dog) and Badger (musical saw) stopped by at my place with a few other friends in tow for a set of saw-sung carols, fantasical stories and a couple Music Tapes banjo tunes - all performed solo next to the Christmas tree. Even with the show's short notice - I'd just gotten an email that morning with details - about ten to fifteen fans showed up for the event. After the set, Julian paused for a few snapshots (see above) and left as quickly as he had came - I unfortunately wasn't able to follow the traveling party to the next apartment. Jesse Jarnow, contributer to the Voice, attended and wrote up the event on that blog.

Julian was recently featured on NPR's Morning Edition, which commented that The Singing Saw at Christmastime's layered saws "capture just a bit of bone-chilling terror -- just right for these uncertain times." On Christmas day, Julian and friends gave an interview and performed live for NPR's World Cafe. If you missed it, you can listen to it now at their site.

In addition to the date above, Great Lake Swimmers are also playing the Bell House in Brooklyn January 9th (tix) with Haley Bonar & Daniel Martin Moore, and a Feburary 7th date in Guelph, Ontario, near their home base of Toronto, for the Hillside Festival.

Video of Beirut playing with Hawk & A Hacksaw, and all dates, below...

A Hawk and a Hacksaw featuring Beirut 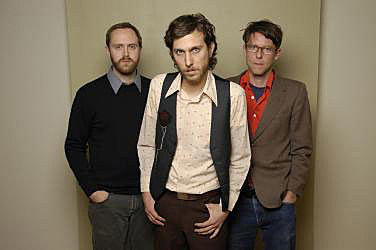