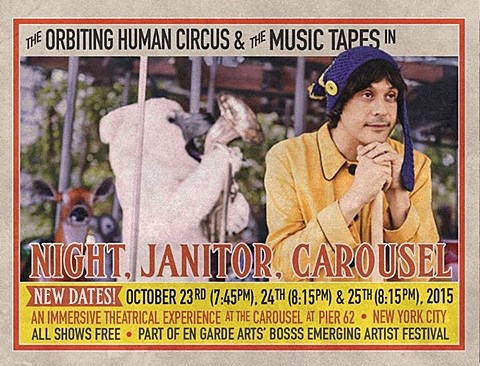 Although Neutral Milk Hotel will not be touring for the foreseeable future, fans who miss the band's whimsical shows and music will have the opportunity to see band member Julian Koster and his own band The Music Tapes perform with his theatrical troupe, The Orbiting Human Circus, next month in NYC.

Koster is known for his eccentric nature and use of carousels in previous projects, so it shouldn't come as a surprise that this will take place aboard Hudson River Park's Pier 62 Carousel on October 23, 24 & 25 (moved from Oct 2-4). Told through songs from Music Tapes, Night, Janitor, Carousel tells the story of Koster's seriocomic alter ego, The Janitor, who has to clean the carousel in solitary at night. The Janitor combats loneliness and boredom through hallucinatory daydreams in an immersive theatrical experience, allowing the audience to join in on The Janitor's wild imagination.

Koster says of the character:

He ran away, and had all this knowledge and skill to clean and not much else, and he ended up being a janitor because he could get a job with this craft, but he hates it. But in a weird way, he can't get away from the thing that was foisted upon him as a kid, and though he ran away, he still couldn't get away from it. Now he's confronted with it, and he has to learn to be it. He doesn't get off that easy, and he has to learn to find his way through it and conquer it, and that's a lot like life.

His loneliness is navigating him, and I feel like that navigation is just what that character is. In a lot of ways, I feel like it's like a drag queen or something in a funny way. It's a character, but it's another part of you. It wasn't so much I was deciding from the outside; it was more, "Who is this person?" His qualities just scream that he's a janitor at night and he's cleaning stuff alone. But only a little of it is in this particular play, and there's a lot of it to go around.[Gothamist]

Specifics on the shows:

Performances are 30 minutes long and while it's free, space is limited. Arrive early. The show is part of the En Garde Arts' BOSSS (Big Outdoor Site-Specific Stuff) Emerging Artists Festival. More information can be found at the Orbiting Human Circus page.