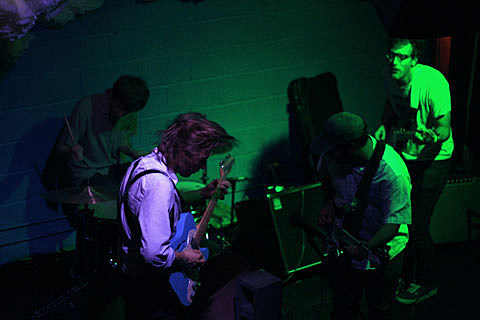 Julian Lynch has announced a new Brooklyn show happening in a short two-and-a-half weeks from now, and just a week after he and fellow Underwater Person Andrew Cedermark open for Titus Andronicus and Real Estate on New Years Eve. Julian will headline Music Hall of Williamsburg in Brooklyn on January 7th with Big Troubles and fellow Underwater Peoples Family Portrait. Tickets go on sale Thursday at noon. More dates for all bands are listed below.

In addition to a DC date with Julian, Big Troubles will also play January 3 at Monster Island Basement with The Babies (aka the Vivian Girls/Woods side project) and January 21st at Glasslands with MINKS (tickets). All Big Troubles dates are listed below.

The MINKS show is the band's album release party for By the Hedge which is due via Captured Tracks on Jan 11th. The band is also on board for a tour with Dum Dum Girls which will include Bowery Ballroom on March 4th with Frankie Rose & The Outs. Tickets are still available.

Album streams of Lynch's recent Mare and Big Troubles' recent Worry, and all tour dates, below...