'Plenti' of tour dates on the way? 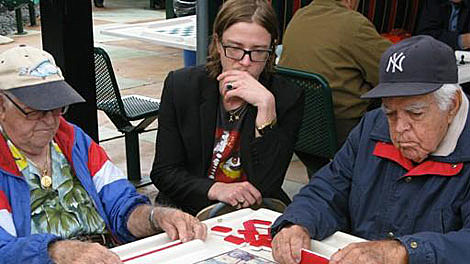 The inaugural "It Came From Brooklyn" show at the Guggenheim happens this Friday, August 14th with The Walkmen (who also play Summerstage on the 16th with Dinosaur Jr. and Saviours), High Places and the Brooklyn Steppers Marching Band (plus Colson Whitehead and emcee Leo Allen). Tickets are still on sale.

The next edition of that monthly series on September 25th will feature a headlining set by Julian Plenti (aka Paul Banks of Interpol). Presumably this will be his first real show as Julian Plenti (and the September show that was promised). Also on the museum bill are I'm In You, readings from Rivka Galchen and Hampton Fancher and host Eugene Mirman. No tickets yet.

Banks's Julian Plenti is Skyscraper album came out on August 4th. Two tracks from it are above, and the full record is streaming at Rhapsody. It looks like he'll be planning a bigger tour around the Plenti material this fall.

Interpol frontman Paul Banks has revealed today (August 11) that he plans to tour as his solo alter-ego Julian Plenti.

The singer, who recently released the album 'Julian Plenti... Is Skyscraper', spoke to NME Radio about his plans for his solo project.

"I'm really enthused about this music and making more of this music and doing everything that goes into it," he told DJ Iain Baker. "There are some shows that are just getting booked now. There will be a tour!" [NME]

He played the album's first single, "Games For Dates," August 8th on Jimmy Fallon. That video, with the Emily Haines-starring official music video, below...