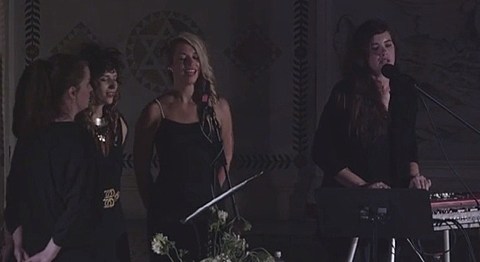 For her performance on Tuesday, Ms. Barwick similarly surrounded herself with a small cast of extras to recreate her "Nepenthe" songs: the guitarist Scott Bell; the violist Rose Nelis; and the singers Sharon Van Etten, Kate McGuire, and Taraka and Nimai Larson.

As they performed, soft lights played in a circle overhead, alternating with video by Derrick Belcham: snowy, windblown Icelandic landscapes morphed into eerie scenes of Ms. Barwick floating serenely in a lake, a long, white dress billowing around her. Returning alone for an encore, Ms. Barwick performed the title track from "The Magic Place." A feeling of homecoming could scarcely have been more evident. [NY Times]

To celebrate the release of her fantastic new ambient pop album, Nepenthe, Brooklyn's Julianna Barwick played a hometown show at Judson Memorial Church (8/20) on the day of its release. As mentioned in the above review, Julianna was joined by a number of guests during her set, including Sharon Van Etten and Taraka and Nimai Larson of Prince Rama, who sang with her. Check out a new, high quality video of the three singers joining her for "Crystal Lake" from the new album, below.

Not long after the release show, Julianna headed a bit north to play Hudson, NY's Basilica Sound Scape on September 13, where she was was part the day that included Pig Destroyer, Evian Christ, Pharmakon, Richard Hell (reading), and more.