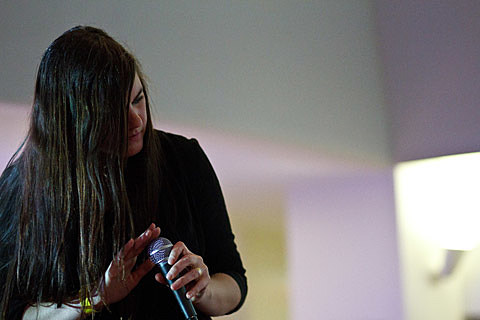 "Debut" is an expansive evening of divergent and evolving paths through an experiential narrative, and tells the story of a group of teenagers who break into an abandoned building on the evening of their senior prom. Throughout the evening, the music, lighting, costume and set design will actively evolve to reflect the shifting perspectives of the characters and audience.

The show premieres in Queens on October 7-9 at the Knockdown Center, the same place that hosted Hardcore Activity In Progress and M.I.A. / A$AP Ferg earlier this year. Tickets for all three nights are on sale now. Trailer below.

"Debut" follows Terndrup and Belcham's production of "The Wilder Papers," which they staged at the Knockdown Center this past June with music/performances from Barwick, Fleet Foxes' Skyler Skjelset, Noveller, Porcelain Raft and Hannah Epperson. Check out a video of some highlights below.

Julianna Barwick plays NYC again not longer after "Debut" at the Pitchfork/Blackened Music-presented "Tinnitus" show with Ben Frost and Oneirogen on October 18 at The Wick. Tickets for that show are still available.

"Debut" trailer and "The Wilder Papers" highlights video below...