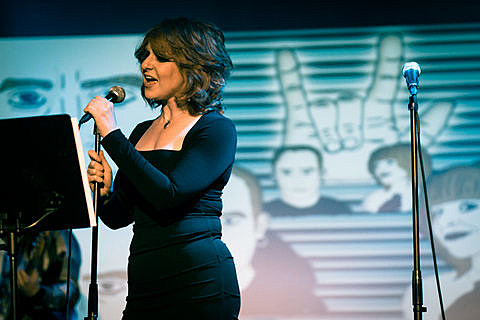 Ted and Julie also wrote a holiday song together called "Bitter on Christmas" for Julie and Billy Eichner's Hulu series Difficult People. You can listen to it via Apple Music.

Meanwhile, Ted Leo is also playing some Christmas shows of his own with Aimee Mann (they did this last year as well) on December 10 at Town Hall and December 12 at Music Hall of Williamsburg. Tickets are still available.

And in somewhat related news, Ted Leo and the Pharmacists drummer Chris Wilson's band HOUND has a new record coming out. SRA Records will release Out of Space on November 27, the same day they play a release show with The Kominas and Dangerbird at Everybody Hits Philadelphia. They released a new song today called "Over the Edge," which follows the previously-released "Emotional Collapse," both of which are fun, fuzzed-out '70s hard-rock rippers. You can stream them below.