Jesus is just all right with them: Triumph & Klausner @ Bell House (via @kieshak) 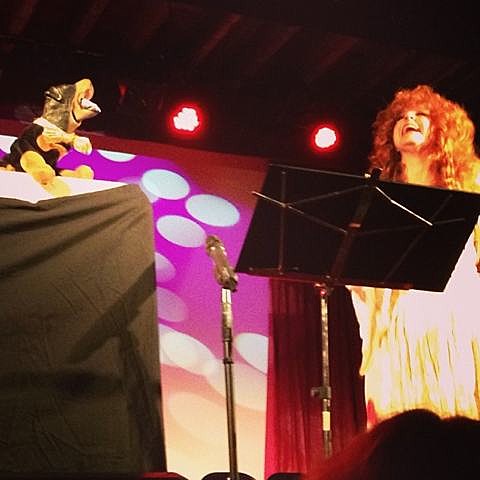 Julie Klausner did a live taping of her How Was Your Week? podcast last night (10/30) at The Bell House and guests included Ted Leo, AC Newman, Jean Grae and Leslie Kritzer (subbing for a sick Laura Benati). Among the things that happened was a live performance of songs from Jesus Christ Superstar, featuring Ted Leo as Judas and Triumph the Insult Comic Dog as King Herod. You're just gonna have to wait for the podcast to hear that.

If you missed it, you can see her soon in NYC as Julie announced a five night run (November 22 - 26) at Joe's Pub titled "TOO GAY FOR BROOKLYN: An Evening of Cabaret with Julie Klausner" where she promises to "sing some goddamn songs." Tickets are on sale now. She did it back in June, too, with guest (but maybe not surprise) appearances from Ted Leo and Bridget Everett.

In other news, on Sunday (10/27)k Julie feigned outrage on Twitter over Banksy's lastest reign of terror, a Halloween "installation" on Houston & Elizabeth which featured a Grim Reaper in a bumper car and an accordion player, plus occasionally playings of Blue Oyster Cult's "Don't Fear the Reaper." Some people, though, didn't get that her Twitter rant (including such bursts as "You know where I like my art? IN MUSEUMS. You know how I like my apartment building? FREE OF BANKSY AND THE CROWDS HE ATTRACTS") wasn't real.

And finally, Julie and her pal Ted Leo co-starred in a recent How Was Your Week? video where they (and Chris Spooner) take a class on whiskey, with predictable (and funny!) results. You can watch that below.

How Was Your Week: Whiskey and Whittling