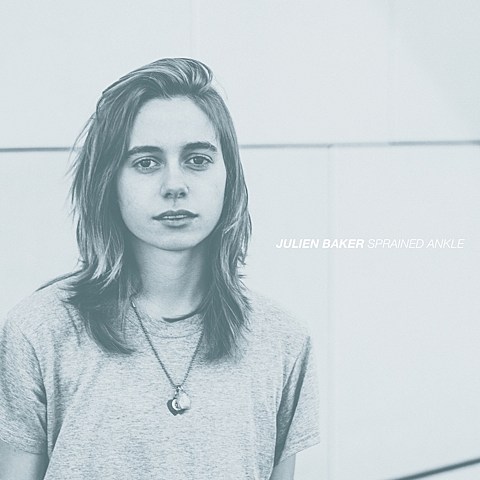 Twenty-year-old Memphis singer/songwriter Julien Baker fronts the band Forrister (fka The Star Killers), and as of last week she's got a solo record out in the world called Sprained Ankle. It's on 6131 Records, which is mostly known for releasing punk music (like Touche Amore and Joyce Manor's first albums), but punk this is not. Most of the record has Julien's voice and clean electric guitar in the forefront, only backed here and there by some sparse drumming or keyboard textures (and one song, "Everybody Does," is acoustic). And if "singer/songwriter from Memphis" makes you think you're getting something indebted to country or early rock n' roll, it's not that either. It's also nothing like the '70s soft-rock of Matthew E. White, whose Spacebomb Studio is the place Julien recorded Sprained Ankle. It's the kind of sad, emotive, singer-with-a-guitar music that you can imagine fans of Jenny Lewis and Conor Oberst latching onto. You can stream the whole album and watch the video for the title track below.

Julien has a few shows coming up, including two in NYC. One is opening for The National/Menomena side project EL VY and Wye Oak at Bowery Ballroom on November 13. That show is long sold out, but if you have tickets this is a great reason to get there early. The next night, she opens for Canadian alt-country trio Elliott Brood at Mercury Lounge (11/14). Tickets for that one are on sale now. All of Julien's dates are listed below.

That Bowery show is one of two EL VY / Wye Oak shows in NYC. The other is at MHOW the next night with French art pop artist Mina Tindle opening (also sold out). Her newest album Parades came out last year and you can stream that and watch a video from it below too.