The first notable US "socially distant" concert of the coronavirus era happened in Arkansas nearly a month ago, and while new cases have begun to surge again in areas of the country that have reopened more broadly, it appears the state is not ready to put a stop to live music again, either. That includes Hot Springs, AR's Magic Springs Theme and Water Park, where a series of summer shows was announced back in January, and is still on, for now at least. Quiet Riot and Molly Hatchet co-headline on July 4, and Dokken and Lynch Mob play on July 18.

A COVID-19 alert from the park regarding Quiet Riot and Molly Hatchet's show reads:

At this time the Riots & Rebels Tour featuring Quiet Riot, Molly Hatchet & Blackfoot scheduled for Saturday, July 4th is are going forward as planned. To ensure everyone's enjoyment it is highly recommended that concert attendees bring blankets as social distancing guidelines of six feet will be enforced. We ask your assistance in self-distancing your group from others.

Due to these restrictions reserved seating sales were discontinued. Those who have purchased reserved seats will provide updates individually via email.

We thank you in advance for your patience and understanding with regards to the new health and safety guidelines and look forward to seeing you in the park soon.

As Blabbermouth points out, Quiet Riot drummer Frankie Banali spoke about the show during an appearance on SiriusXM's Trunk Nation on Wednesday (6/10). "It's July 4th, is actually the date that we're playing," he said. "And I am told officially through e-mails that the city has approved the date and they've approved it for as much as a three-thousand capacity. So it should be interesting. I'm still waiting to see what's gonna happen, because you don't know if two weeks out, or a week out before the show, all of a sudden, that part of Arkansas gets shut down, locked down, the show is canceled or postponed to another date. And in the meantime, you have expenses — flights and hotels and all this kind of nonsense that you have to deal with."

Banali has been battling stage IV pancreatic cancer over a year, which makes playing shows during a pandemic even more potentially risky. ""Early on [during the coronavirus crisis], my wife put us both on home watch, and we just really haven't been out of the house with the exception of going into my doctor's to get treatments," he said. "I have to be very, very careful, because I'm in the age group, and because of serious underlying conditions, I'm at the top of the list that if I did get coronavirus, I probably would not survive it. But since we last spoke, I ended up having two more trips into the hospital with blockages. There's always something — it's, like, one step forward, two steps back, kind of situation. But I'm willing to fight it out."

Quiet Riot have other shows still scheduled this year, too, that they intend to play. "I think we only had one, possibly two cancellations [so far]," Banali said. "The rest of 'em were getting moved further and further into the year. So some of the stuff now is into August, September, October, November, and quite a few, actually, rolled over into the 2021 performance year. And God willing, I'll be around to play those." 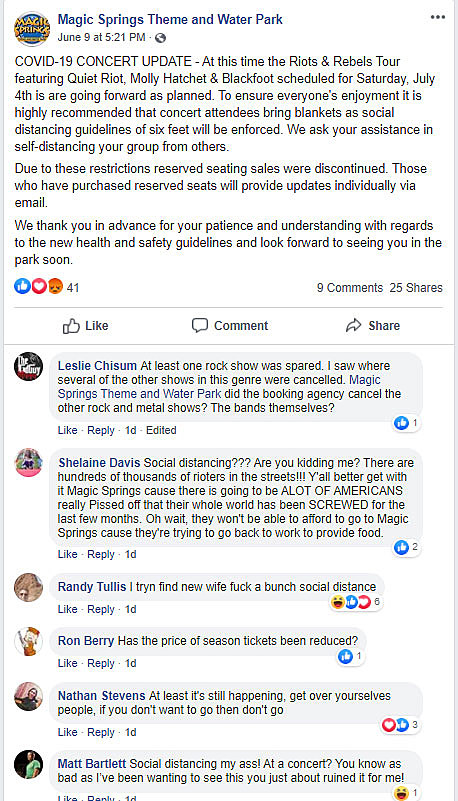