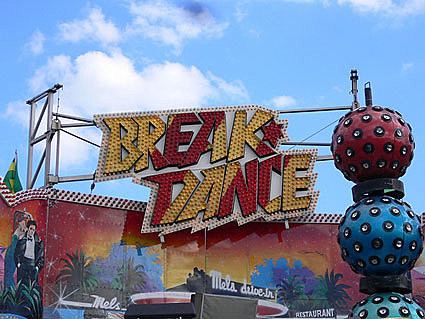 I have been totally slacking on the going out front. Luckily this week there is plenty of really exciting dancing to be done (both when I'm here and when I'm going to be away - more on that later). On to this week:

Some really good options for Thursday night (July 3, 2008) (yea-yuhh for not having to be up early for work Friday morning!): 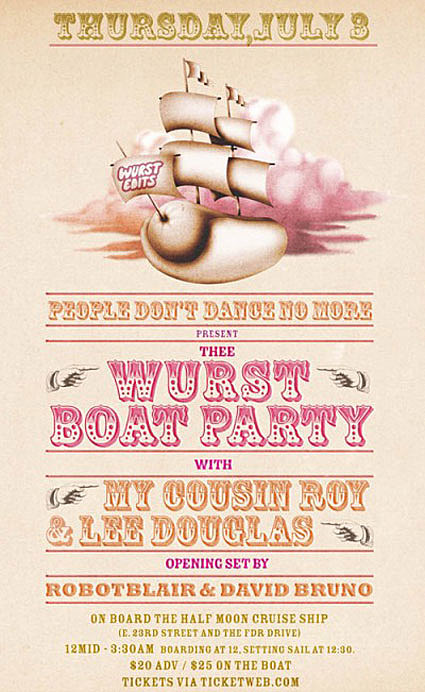 David Bruno (ex/sometimes BV contributor) and Robot Blair get things started, along with some free beer. Professional disco-ers My Cousin Roy and Lee Douglas keep things going until the ship docks at 3:45.

$20 advance tickets available here. A very limited number of $25 will be available on the boat. The party is 18+. Be sure to stop by an ATM before getting on board - the bar is cash only.

For those of you who want to keep your feet on land, Thursday night at Santos, residents Alex from Tokyo and Neil Aline hold things down while Dave 1 (of Chromeo), Dominique Keegan (Plant Music/the Glass), and Star Eyes (Trouble & Bass) take their turns behind the decks.

I like all of the guest deejays, but am especially looking forward to Dominique's set. I remember him blasting great stuff out of APT's speakers back in the day when I was just getting my dancin' feet wet. I last caught him at Ruff Club at the Annex in January, (obviously) playing a lot of different stuff than what I had remembered from the years prior, but still excellently selected and mixed to make you dance your ass off. Download The Glass (Dominique and DJ Wool) May DJ mix at the top of this post (tracklist below). There's also a mix from Star Eyes up top as well. And so as not to neglect Dave-1, check out an interview Big Stereo did with him earlier this week. 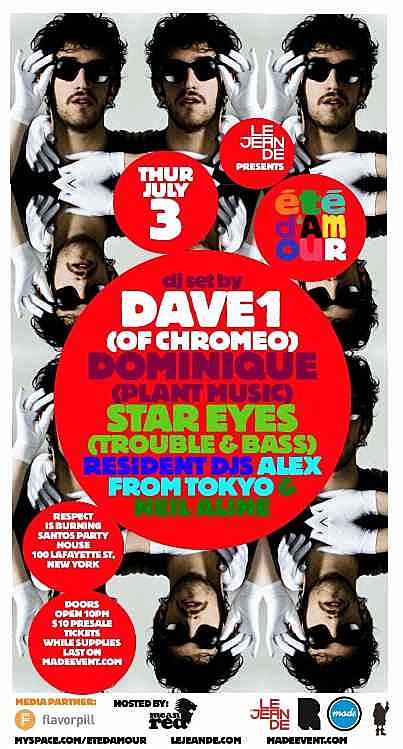 Friday night (July 4th) Montreal invades New York! Nu Ravers on the Block is a monthly dance party thrown by Mister Ed and Mr. P (referred to as NROTB) up in Montreal. It's featured a number of great guest deejays including Mr. Flash, Les Petis Pilous, and Jokers of the Scene. The party is currently on hiatus because the misters are taking time to deejay more often - including Friday night, here at the Ruff Club at the Annex. I've been listening to their "mixtape 1" for quite a few months now - 40 minutes of great tracks, no lulls in sight. Download it at the top and check out the tracklist:

For something more recent from NROTB, tune in to Rat Radio NYC Friday at 4pm.

B. Rich is also deejaying at the Annex Friday night. He's based out of Boston and...

Grew up on RUN DMC at age 5, started writing rave music at 13 and well... now here I am. Electro, bassline, house, baltimore with hints (or huge doses) of early 90s revival.

Hear what that sounds like from his Live WERS 88.9fm mix at the top of this post. Tracklist:

Saturday (July 5) night the madness begins in more ways than one. I'm leaving for Montreal that morning an am bugging out about all the good deejays I will be missing. Please go to some of these events and post about them in the comments so I can live vicariously through you. In exchange I offer you my Montreal muxtape which is full of great, summery, poppy, and French tunes that pleasantly haunted me on my visit there last July. Many of these were played at some point or another, and often repeatedly on Montreal's superb, good old fashioned radio stations. CKUT 90.3 fm is based out of McGill University and is awesome. You can listen to it online and check out archived shows here. 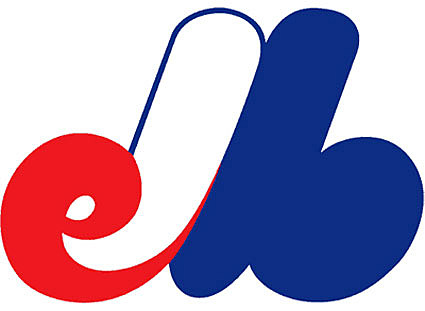 Anyway...back to the serious fun you will be having:

Saturday night the excellent Trevor Loveys fittingly will be deejaying at Love. I caught him deejay around this time last year at Hiro and his set was great - hours of flawlessly transitioned fidget house. Get some more info about Trevor, fidget house, and some releases he's got coming up from GBH's interview with him. 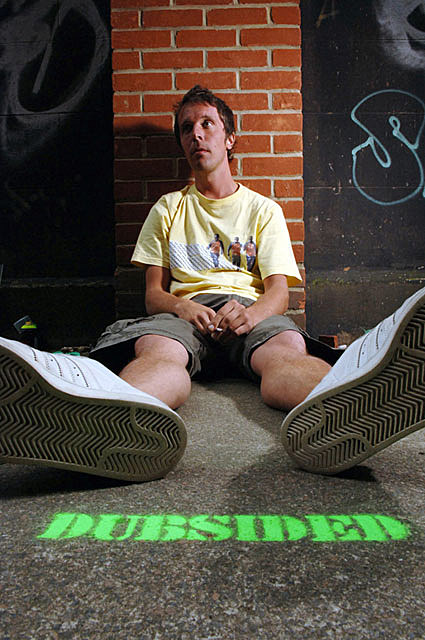 Doors are at 10, cover is $10. Advanced tickets available here.

A second great option for Saturday night is Poni Hoax, Zombie Nation, and Riton at Studio B. Poni Hoax and Zombie nation are scheduled to perform live, and Riton is deejaying. I haven't heard much of Poni Hoax, but they've received quite a bit of support from a number of deejays including Riton, Tim Sweeney, Optimo, and Laurent Garnier, which is usually a good sign. When people think of Zombie Nation, the next thing they think of is usually this song. They've been busy since Kernkraft 400's release in '99, and have made a great track with Tiga under the moniker ZZT, "Lower State of Consciousness" which you have undoubtedly heard out somewhere. It bangs and has been remixed by Justice to boot. Hopefully their performance Saturday night will promise more of the same. 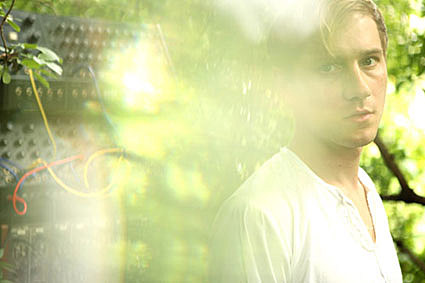 Riton rounds out the live music with a deejay set, usually on the electro/house side, but perhaps he'll throw in some stuff from his new project "Eine Kleine Nacht Musik" -

"A concept record in the very best sense of the word, his eponymous album, due for release on 14 July, pays affectionate tribute to the hugely seminal genre that is Krautrock. With its dreamy, free-floating atmospherics, gently pounding Motorik rhythms and sublime, minimal arrangements, it is that rare release that somehow manages to sound like a crackling transmission from the past and a broadcast from a sleekly glittering future...The 'Eine Kleine Nacht Musik' long player is realised through Modular recordings on 14th July and will be accompanied by a 10 minute, 3 track film in keeping with the spirit of record's traveling, epic quest-like vibez. Directed by "The Phantom" and starring Henry himself, the film will follow our humble hero on a cross-dimensional journey, soundtracked by the first 3 tracks on the record."

You can download Eine Kleine Nacht Musik's German themed mixtape at the top of this post and watch a trailer for the film set to accompany the record here. 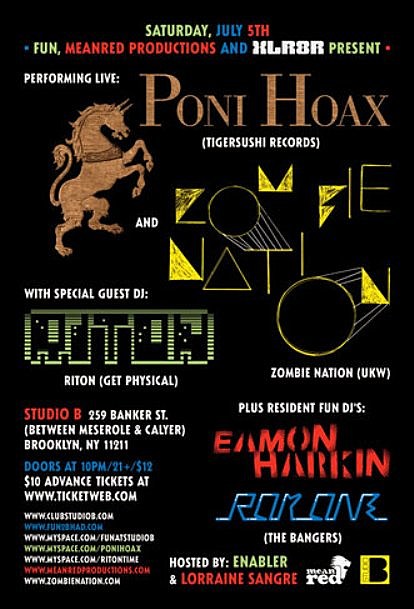 One last option for Saturday night...hit the beach! I:Cube is deejaying the Beach Party at Water Taxi Beach in Long Island City. A major player during the heyday of French touch, this deejay/producer isn't stateside very often. You're not going to want to miss this one. Stream some of his mixes over on the Versatile Records website. 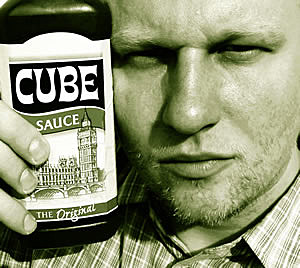 I recommend hitting the Yard for Sunday Best. It'll give you another chance to catch Riton in case you went with one of the other Saturday night options.

food: Organic and mostly local fare provided by Kelly Geary of Sweet Deliverance
booze: You have to be 21 to drink it, but we'll be selling it at the bar
ages: All ages
time: 3p - 9p
cover $8
rsvp@sundaybestnyc.com

And finally...if you couldn't get enough of I:Cube at the Beach Saturday night, he'll be deejaying at APT: 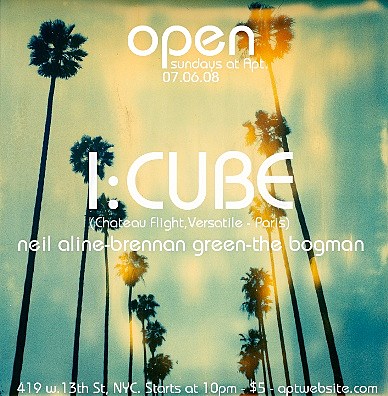 What else do you recommend?