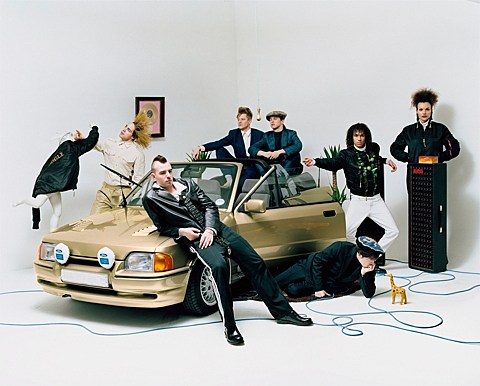 London's Jungle, the mysterious band behind an EP of retro-futuristic funk, The Heat, are mysterious no longer. Neither of the two men pictured in early "promos" are actual members, and they're not in fact a duo. Rather it's a 7-piece band, all of whom are pictured above. They also recently performed that EP's track "Platoon" for BBC Radio 1, and to see these 7 members in action (though it's very dimly lit), you can watch a video of that below.

The EP was released on Chess Club Records, but it looks like the band will release its followup on a much bigger label, XL Recordings, their new home that makes them labelmates with Radiohead, Vampire Weekend and Adele.

To really see what the actual Jungle are all about, catch them on their upcoming North American tour. The NYC shows happen on March 8 at Rough Trade and March 9 at Mercury Lounge, and are amazingly not sold out (tickets). (UPDATE: WET was also just added to both NYC shows).