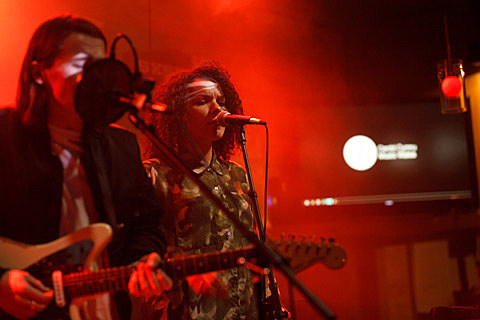 The semi-mysterious London funk band Jungle have been steadily growing their buzz folowing the release of 2013's The Heat EP, will release their self-titled debut full length on July 15 via XL. They recently performed its single "Busy Earnin'" on Jimmy Kimmel Live. You can watch a video of that below.

The band played their first-ever US dates in March which included NYC, LA and SXSW and they were just back in the area on a tour earlier this month when they played a Bowery Ballroom show (6/18). They'll return to North America for an even longer tour later this year which includes two of their biggest NYC shows yet: Warsaw on October 1 and Irving Plaza on October 2 with Beaty Heart. Tickets for the Irving show go on sale today (6/25) at noon, and there's a few special offers including the possibility to get two tickets for the price of one. Warsaw tickets will be on sale at noon too.

All dates are listed (some with Beaty Heart and some with Empress Of), with that video, below...