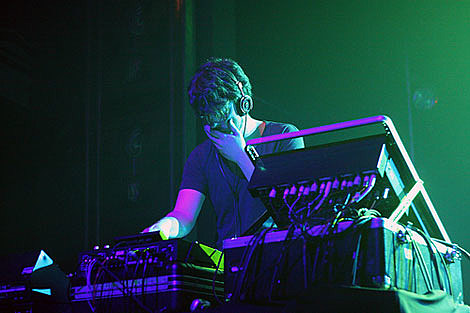 we are just finalizing the details for the makeup show in new york. it will be announced asap.

on a technical note, a few people have been asking about what happened, and why we had to cancel. i just wanted to let people know that we didn't cancel because we were unhappy with the sound, or because of some minor technical problem that could have been ignored.

our main sampler which triggers the majority of our outputs and which syncs all of our MIDI equipment to each other had a total software breakdown. it completely stopped intermittently in the middle of songs and was spitting out random stuff to the outputs. we attempted a few times to use a different flashdrive and then to use some different memory to get it working but it kept failing. we thought that we were prepared for this unlikely event by keeping a spare sampler with us at all times.....so after a while of failed attempts we decided to swap out samplers and repatch in a new one, but something completely unexpected (and i might add, almost eerily unlucky) happened. when we opened our spare sampler backstage to swap in the extra memory that we need, we discovered (to our horror) that the clip that holds the RAM was completely snapped off.....yeah we couldn't believe it either......so we attempted to gaffer tape the thing together hoping that it would hold. we tried one song like that and the RAM popped out and stalled the sampler. at that point we had no backup and no recourse, and we with very heavy hearts decided that there was nothing we could do.

I know that it might seem overly technical, but basically it comes down to this. we have made things difficult for ourselves in many ways. we have a large amount of instruments on the stage some of which are played by us and others which are controlled by a sequencer. all of the instruments rely in some way on the central brain of the sampler for midi information which changes settings or sends note information. there are many electronic bands who simply press play on a stereo backing track, who either on a cd player or on an ipod and then play an instrument or sing overtop. i'm not trying to make a judgement about that type of performance, but that is not what we do. we believe strongly in using the instruments themselves on stage and creating a 'live' show. that is what keeps things fun and exciting for us as a group. but please remember we are electronic musicians, and it is our intention to do a show of live electronic music, therefore doing some sort of acoustic set, where there is a guitar strumming and me singing is not an option, it isn't who we are, or what we do. and we would feel ridiculous charging people to see that.

i guess the point of this long rant, is simply to try and give some explanation of why the show was cancelled, and to communicate how hard a decision it was for us to leave. we had been looking forward to this show, for many months, i would have done anything to make it happen. we didn't take any money for the show, as the people at webster hall generously agreed to reschedule the concert at the earliest convenience. the support that we received today from many of our fans in new york city has been wonderful, and we appreciate it so much, we will announce the new show soon, and rest assured your tickets will be honoured.....

The new date is July 24th. "All tickets purchased for the May 7 show will be honored on July 24 at Webster." And tickets are on sale.

The above message was written on the band's MySpace blog on May 9th. They also wrote an earlier entry FROM Webster Hall, right after they left the stage. That is below...

i'm backstage at webster hall. we had to cancel the performance midway through. we did everything we possibly could to fix the broken sampler and even use our backup sampler which was broken as well.

i'm thinking of the smiling faces of the people in the audience, who warmly applauded our every effort, and who even smiled at us when we announced that we couldn't continue. who stayed through so many interruptions and whose enthusiasm gave us hope for a great show.

also the warmth and helpfullness of the crew and staff at webster hall, who did everything they could to help us out.....

we simply couldn't go on and give a completely substandard performance. but we promise that everyone who came out, who bought tickets can use them for a future performance....we will see to that.....

thank you all for your incredible patience,
we love you,
jeremy