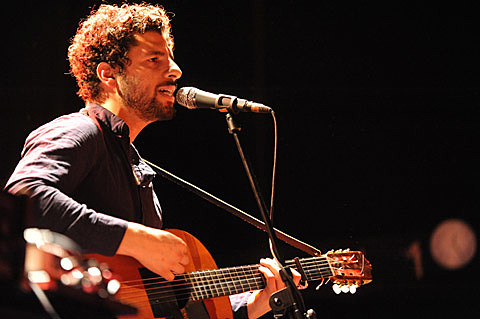 After the intense heaviness of last Sunday's penultimate episode of Breaking Bad (no spoilers, don't worry), it was a pleasant surprise to hear Jose Gonzalez's voice immediately after in the preview for the series' final episode -- via Jose's band Junip's song "Line of Fire." If you missed it, watch below, and get excited for the Breaking Bad series finale this Sunday. Like you're not already. The full song is also streamable below.

Junip head out on tour in October, starting at ACL, hitting NYC for one show at Le Poisson Rouge on October 10 (not two shows at LPR as Junip originally reported), returning to Austin for the second weekend of ACL, and eventually ending at La Bellasco in LA before the Swedish band returns to Gothenburg. Tickets to the LPR show are still available.

Want to go to the NYC show for free? We're giving away a pair of tickets to a random person who tweets something @BrooklynVegan and includes both "Junip" and "Breaking Bad" in the tweet. Winner will be notified via Twitter.

All tour dates, the Breaking Bad trailer, Junip's new video for "Walking Lightly" and more, below...