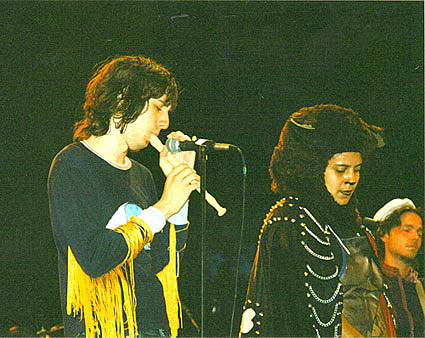 Tickets are STILL on sale for tonight's Kimya Dawson show at Music Hall of Williamsburg (July 2, 2008). It's a benefit with a bunch of bands on the bill that only costs $20, and for what it's worth, it's in a smaller venue than her last and next NYC shows *.

Has the Juno buzz worn off a little? It should be strong now that there's all this pregnancy talk that has "the Most Successful Indie Film in Six Years" back in the news. Maybe parents are afraid to let their kids near Kimya....

With a lot of attention on teen pregnancy these days, parents can use the news to talk about sex and pregnancy with their children. Here are some tips from experts.

- Have age-appropriate discussions about sex. Answer their questions openly and honestly.

- Talk about teen pregnancy. Ask your kids what they thinks about "Juno" and Jamie Lynn Spears' pregnancy, says Bill Albert, spokesman for the National Campaign to Prevent Teen and Unplanned Pregnancy....

Juno is the new Judas Priest. Okay, I made the last tip up (not the one before it though), but young girls across the world are apparently watching Juno and getting Knocked Up like crazy... or are they?

Juno" actor Jason Bateman has defended the Oscar-winning movie against claims it has encouraged teenage girls to get pregnant.

He tells "Access Hollywood," "I don't know the specifics, but I can speak about what sort of responsibility entertainment should hold for social behavior.

"Unfortunately, we've had these instances where guys kill people because of what they hear in rock 'n roll lyrics or some garbage like that. Look, if you're going to blame a movie or song for your actions, whether they be good or bad, I think you're looking at the wrong things to influence your life.

"What we're doing is providing entertainment in different flavors for your consumption. I think people should look to other areas of their life for lessons and guidance, mainly parents, or teachers, or friends, or whomever. That should probably be where you should point your eyes and ears." [SFGate]

Adam Green and Ozzy Osbourne could not be reached for comment...

* I won't be surprised if the show does end up selling out at the door.