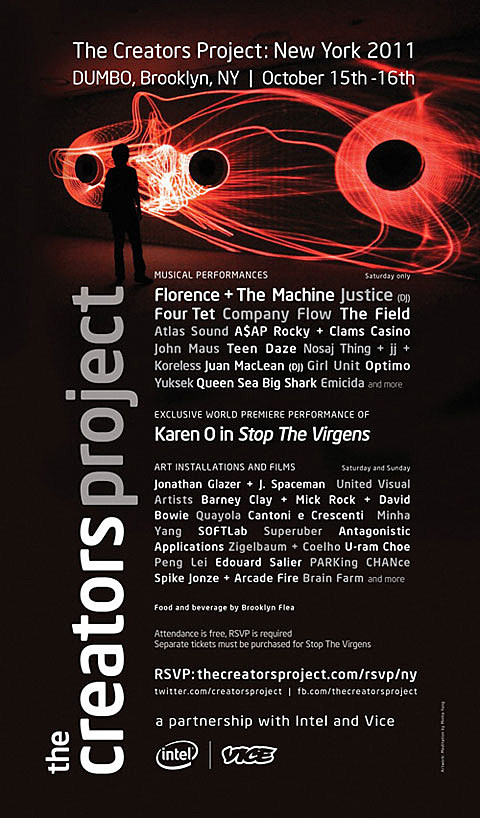 Info on the latest additions below...

If you haven't heard the great news, The Creators Project has announced that the French electronic power duo Justice has been added to the lineup, as well a Juan Maclean DJ set and The Art of Flight, the epic snowboarding film starring Travis Rice and directed by Creators alums Brain Farm, plus some other great stuff. We will save you the time, you can just read below for more info!

People still recall our inaugural NYC launch event at Milk Studios last year with stars in their eyes. But this year we're going bigger and better, and hosting an unforgettable art and technology festival in DUMBO, Brooklyn on October 15 & 16th.

All year long we've been working with Creators of all kinds on the development of new Studio works and debuting them at our international events, starting with Coachella this April and, most recently, in Seoul and Beijing. Some of the artworks have traveled the globe all summer, like the final adaptation of UVA's audio-visual sculpture, with a soundtrack by composer Scanner, which will be the largest responsive work ever created by the UK based artists.

On Saturday, there will be dozens of live music performances from bands like Florence + the Machine, A$AP Rocky, Atlas Sound , Company Flow, Four Tet and John Maus, to name a few.

The event will be free and open to the public, though RSVP is mandatory and all venues will be subject to capacity regulations. In addition to the two outdoor stages and an indoor DJ hub, there will be a plethora of food and beverages from the Brooklyn Flea and a host of major art installations and films spread out over 11 different venues in DUMBO.

We've already told you that we're debuting Karen O's mysterious and seductive psycho-opera Stop the Virgens--an assault on the tragic joys of youth. As our only ticketed performance, tickets are quickly selling out. For ticket information visit St. Ann's Warehouse....