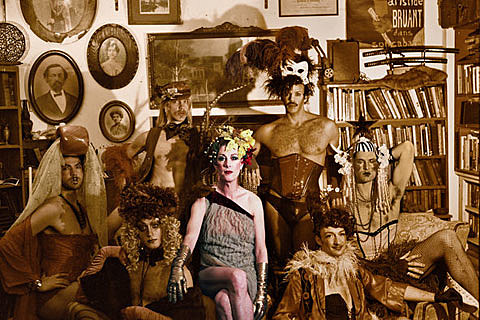 NY Times: You have a new CD out in March called "Justin Vivian Bond: Dendrophile." Explain.

Dendrophile is Justin Bond (of Kiki & Herb fame)'s first solo record. It was produced by Thomas Bartlett (Doveman) and also features contributions by Sam Amidon, Rob Moose, Dawn Landes, Beth Orton (as mentioned above) and others.

Justin Bond, who seems to stick to the intimite confines of venues like Joe's Pub for headlining shows lately, will celebrate the new CD release with a headlining show at Bowery Ballroom on April 5th which is four days before the CD Release show in San Francisco. Tickets for the NYC show go on sale at noon today (2/24).

Opening the Bowery show will be Doveman who Justin (and pretty much everyone else mentioned in this post so far) recently joined for a show at Le Poisson Rouge. Maybe Justin will pop in again when Doveman and guests return to LPR on March 16th. Tickets are still on sale for that.

Justin, who was in attendance to see his Scissor Sisters and Lady Gaga play Madison Square Garden this week, also has a special show coming up at Joe's Pub on March 7th - a new musical he co-wrote with Sandra Bernhard and Scissor Sister Jake Shears. On March 9th Justin hosts a book reading in NYC.