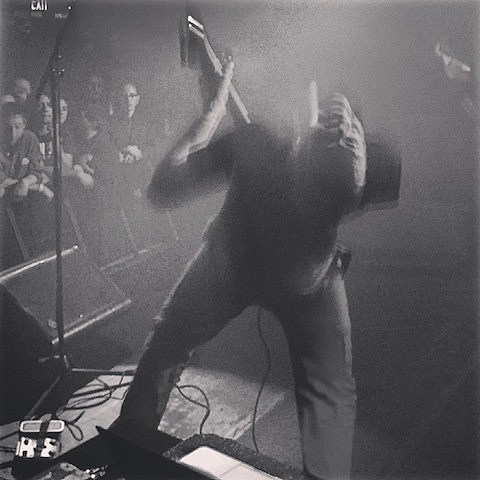 Prolific jack-of-all-loud-trades noisemaker Justin K. Broadrick has unleashed yet another EP onto the world, this time under his moniker JK Flesh. His latest release, the ironically titled Nothing Is Free (ironic because it's pay as you wish) is a fantastic follow up to JK Flesh's 2012 release "Posthuman" and a perfect continuation to the nightmareish aural adventure that is JK Flesh.

For the sadly uninitiated, "prolific" is sort of an understatement when you consider how much Broadrick has done since getting involved in music in 1982 at the tender age of 13. Acts associated with Broadrick include Napalm Death (of which he was an original member in 1985), the mighty Godflesh, Jesu, Fall of Because, Final, GOD, Pale Sketcher, Techno Animal, Greymachine, Council Estate Electronics, Scorn, Valley of Fear, Head of David, Blood of Heroes and, believe it or not, MORE. I mean, check out this dude's discography. And his remixes of other artists are the stuff of legend.

The JK Flesh branch of the Justin K. Broadrick family tree is a truly solo endeavor and takes listeners into "the realm of heavy/brutal electronica - informed by dub, power electronics and the extreme excesses of electronic music driven by beats and bass. Justin initially used this pseudonym in Techno-Animal with co-conspirator Kevin Martin (The Bug / King Midas Sound, etc)." I could not have summed up JK Flesh any better than that. The music, though cohesive and rhythmic, often shatters our ears with aggressive ambience and shrill, distorted, explosive chainsaw grinds of rhythm. His latest effort is wall to wall sonic brilliance, though a particular highlight for me is the track "They Own You" which is simultaneously scary, brutal, and beautiful. Stream "Nothing is Free" in its entirety below.

In other Justin K. Broadrick news, his legendary industrial metal project Godflesh is about to embark on their highly anticipated fall 2015 tour. The tour kicks off in Atlanta on September 11 and will lay waste to Brooklyn's Warsaw on September 15 (tickets). Bring earplugs and a diaper.