Charlotte and Justin in 'Incompresa' 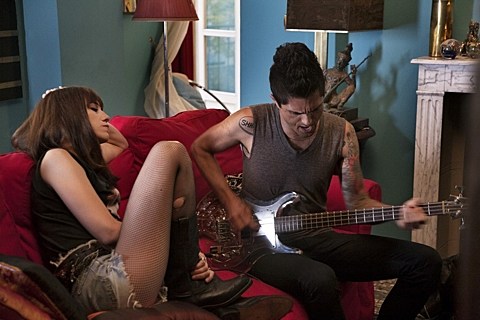 Asia Argento's new film Incompresa (known in the US as Misunderstood) screened at Cannes last year and it opens in US theaters today (9/25). Cannes' description, via IMDB:

Rome, 1984, Aria is nine-year-old girl. On the verge of divorce, Aria's infantile and selfish parents are too preoccupied with their careers and extra-marital affairs to properly tend to any of Aria's needs. While her two older sisters are pampered, Aria is treated with cold indifference. Yet she yearns to love and to be loved. At school, Aria excels academically but is considered a misfit by everyone. She is misunderstood. Aria finds comfort in her cat - Dac and in her best friend - Angelica. Thrown out of both parents' homes, abandoned by all, even her best friend, Aria finally reaches the limit of what she can bear. She makes an unexpected decision in her life.

The film stars Charlotte Gainsbourg, and Justin Pearson (of The Locust, Retox and more) plays her punk boyfriend. Justin also wrote music for the film which coms out as a 7" called Incompresa Songs on October 30 via his own Three One G Records. You can check out a clip of the film that features some of Justin's music, premiering below.

In NYC, the film is playing at the IFC Center. Head here for tickets and show times.

Justin's band Retox is also heads out on a West Coast tour in October. Those dates are listed below...