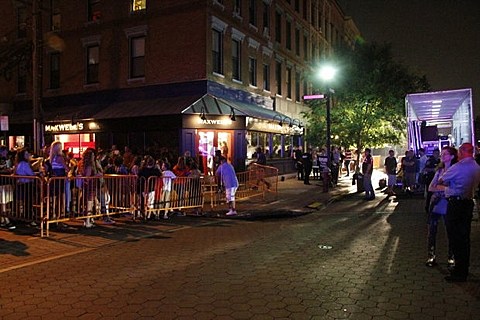 Last night (8/28), Justin Timberlake tweeted "Join me & @Target tonight for just one song. Let's "Take Back the Night." First 150 get in. See you there!" with a picture of a microphone, a clock with 30 minutes on it, and Hoboken venue Maxwell's, which closed its doors at the end of last month. According to NJ.com, it's because last night JT was filming a video for Target (where he has a clothing line) at Maxwell's:

There are thousands of people in front of the club at Washington and 11th streets, according to news photographer Joe Shine. Throngs of media are on the scene.

Timberlake's wife, actress Jessica Biel was spotted near his trailer.

Police are using loudspeakers to try to keep the streets clear, but it is of little use, according to Journal staff writer Michaelangelo Conte.

There are people on every corner, people are standing in the streets 10 feet from the sidewalk, Conte said.

There is a big trailer parked outside. Inside Maxwell's is dimly lit and the star cannot be seen, Conte said.

So The Bongos and "a" wasn't the last show at Maxwell's after all? Will his video be as fondly remembered as "Glory Days?"

This all happened just after JT was in Brooklyn for the VMAs at Barclays Center. Video of his VMAs performance (in case you missed it) below...