Eyehategod on a Rocks Off Boat (more by Chloe Rice) 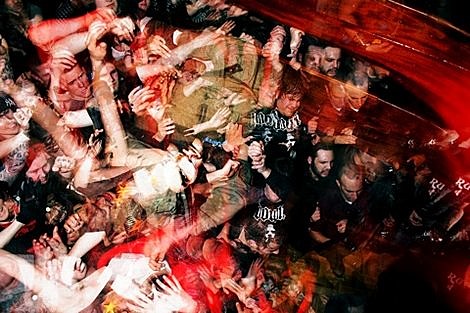 Before I dive into quotes and explanations, I would like to thank twitter and my cellphone for allowing me to take notes at the most inconvenient of times -- like being smushed in between a bunch of big and way-too-stoked hardcore dudes at the Burnt By the Sun show. Because I was a stupid stoner as a teenager, its pretty hard to remember all the stuff I see at shows...

9. Cephalic Carnage while on tour with Mayhem
"It's back to be good, San Diego!" I heard this classic line from frontman Lenzig of Cephalic Carnage in several different cities during the Blackened Fest tour...

8. Howl at Fontanas
"I wish people would cheer like that every time I drink a beer," Howl drummer Tim responded to an assload of cheers and clapping at the free beer Tonesofdeath.com show.

7. Melvins at Nokia Theater
"All you people up front look as bored as my mom when she comes to see us. Don't worry. Down is still going to play," said King Buzzo...

6. Burnt By The Sun at The Cake Shop
"Hey! We're old. Give us a fucking break!" Burnt by the Sun frontman Mike Olender defended his bandmates for pausing to tune in between songs.

5. Eyehategod on a boat
"Pussy, guns and heroin." It's what Eyehategod drummer Joe LaCaze said to soundcheck his mic.

3. Municipal Waste at New England Metal Fest
As it turned out, The Grateful Dead played a show at a venue right across the street from the metal fest, so it was the perfect opportunity for Municipal Waste to mock the situation by entering the stage with a sign in hand while asking if anyone has seen their dog. Frontman Tony Foresta perfected the gimmick when he made a special request, "I wanna see a circle pit of LOVE!"

1. Incantation at NJ Deathfest
Incantation Vocalist John McEntee asked a bunch of over-beer-ed and groggy metal heads from Jersey in his barely-intimidating, death metal throat voice, "Anyone here from Fairlawn?"
And when the stack of hay rolled in and the crickets got bored of chirping, McEntee realized no one was from his suburban, white picket fence town. So he disappointedly said, "Didn't think so." It was sad, cute and funny all in one.

Any memorable quotes of your own? Leave em in the comments.