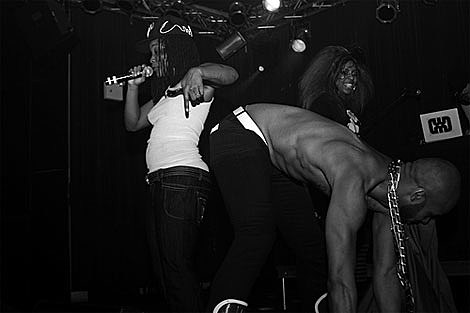 Shunda K, aka one half of Yo Majesty, has been busy lately. To quote an email I was CC'd on before the current "Yo Majesty" tour...

Im looking to set up Shunda K afterpartys' after each YM show date as an attempt to promote my solo career and also give other acts an opportunity to promote themselves as I dont mind sharing...da stage dat is. All of the dates thus far are below, let me know where you can help. The venues Im looking for should be able to hold at leat 150-200 persons'

The tour is now underway and "Yo Majesty" played Highline Ballroom in Manhattan on Tuesday (1/27). The Shunda K afterparty was at Europa... ONE PROBLEM WITH THAT...

"Yo! Majesty was supposed to be embarking on a world tour that would push the critically hailed lesbian Christian rap duo out of the underground once and for all.

Instead, half of the Tampa, Fla.-based group, singer/rapper Jwl B, is behind bars in Florida on an assault charge and apparently out of the crew for good.

"It's unfortunate for her, but for me it's actually a burden off my shoulders," rapper Shunda K (also known as LaShunda Flowers) said of her longtime partner's recent incarceration. "It started being ridiculous the things she was doing. It's actually divine intervention. I'm not sad. I'm relieved."

Shunda K says Jwl B, her partner in rhyme since 2001, has crossed one too many lines - personally and professionally - and is out of the group. But the drama is not stopping K, who started the duoin 1998 - she performs Wednesday at Harpers Ferry in Allston.

"Now Yo! Majesty can be what it's supposed to be," she said, "and that's a relief for the people, instead of coming to a Yo! Majesty show and you're feeling the tension between Jwl and me on stage. I just thank God for what's going on."

K, an openly gay Christian, says life on the road with Jwl has been difficult, with disputes over money, creative control and women sometimes erupting into physical altercations. [Boston Herald]

So I guess that means Shunda K played Highline Ballroom on Tuesday, and Europa too. In case you're wondering, Jwl B is the topless one jumping in the air, and that harmonious holiday picture was just posted to their MySpace for Christmas (which was a little over a month ago).

More pictures from the Highline show (now with only men taking their shirts off) @ Village Slum. More tour dates (lots of them) (mostly billed as Yo Majesty) (and some Shunda ones) below...