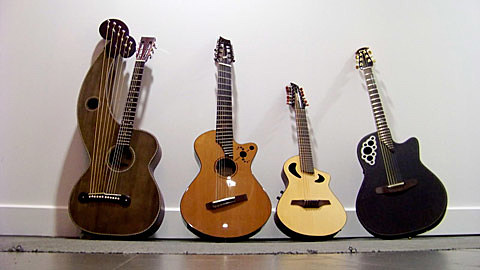 "Just wanted to introduce you to some members of the up-coming traveling guitar-freak show. Harp guitar, 7 string fanned fret nylon, high-tuned 12 string, and of course, the ovation, my original and favorite freak. I woke up one morning at a friend's house and Ru Paul was there. Yes, that Ru Paul . . . just, don't ask right now. He said he shit his pants and his titties got hard when he saw the harp guitar, and I took that as a very good sign." - Kaki King

Meet the Kaki King acoustic arsenal, which you can see up-close at a few select dates where she'll be returning "to her acoustic roots". Kicking off with a show at MoMA's Celeste Bartos Theater on February 23rd with Pedro da Silva (tickets), Katherine Elizabeth King will then fly into Mexico City and tour California and the West Coast before eventually making it back East in April to play City Winery twice before closing out the tour in Binghamton. Tickets are on sale for both the April 7th & April 8th dates at Manhattan's City Winery.

Her full tour schedule and some streaming audio is below.