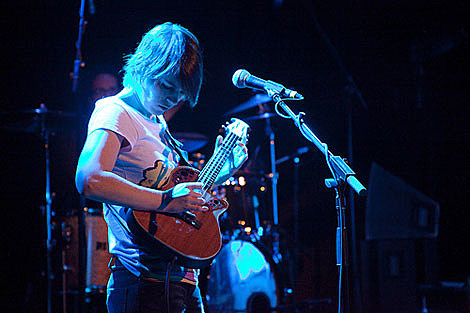 Kaki King has been working on her fifth album, the follow-up to 2008's Dreaming of Revenge, and that release is expected to come this year (though no date or name have been announced). She did take time away from recording to play a one-off at Music Hall of Williamsburg on December 12th. At that show, she debuted a bunch of new material, which you can check out in the videos below.

Her upcoming tour plans, with opener An Horse (who are currently on tour with Tegan & Sara in Canada), are starting to unfold - a handful of announced dates range between mid-April in NYC and mid-May in California. For those NYC shows, the first is Thursday, April 15th at Music Hall of Williamsburg; the second, Friday, April 16th at Bowery Ballroom. Tickets go on AmEx presale Wednesday, January 13th at noon; general sale is Friday at noon.

New songs live at MHOW and tour dates are below...