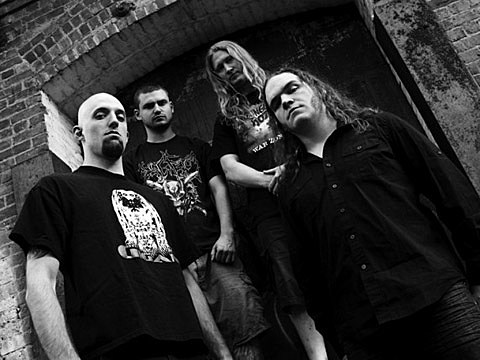 New Jersey's current death metal clan is beyond incestuous. Favorites like Abazagorath, Evoken and Funebrarum all run in the same circles, with many members of each band intersecting with one of the others. Kalopsia is another band in this pool of expanding and contracting crew of musicians across the water.

Kalopsia is a project featuring members of Funebrarum, Dehumanized, Abacinate and Deteriorot, and their new album Amongst the Ruins is due at the tail end of this week (9/15) via Godeater. Close to a decade in the making, Kalopsia divvied out the first taste via a stream at Decibel magazine, but now you can stream their LP in its entirety below for the very first time.

Unfortunately no dates to speak of for Kalopsia, but look for that to change in the near future. Until then, check out Amongst the Ruins streaming below along with a recent rehearsal demo.