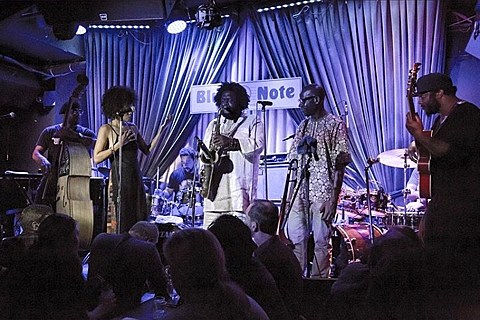 For his New York debut as a bandleader, Washington brought along some of the friends. "I met Terrace when I was 13," Washington told the crowd when introducing Terrace Martin, alto saxophonist and heavyweight hip-hop producer for the likes of Snoop Dogg, "and he was bad way back then." Martin brought the bandleader on board for Kendrick Lamar's similarly epic album To Pimp A Butterfly, where he worked alongside fellow hometown hero bassist Stephen "Thundercat" Bruner - who also joined the band at the Blue Note.

Opening with Askim, the band laid down grooves so deep they threatened to run through the stage. "The rhythm is thick up in here," Washington said, alluding to the two drum sets and two bassists (one upright, one electric) onstage who seamlessly took the song through everything from a retro-sounding shuffle, to a modified reggae beat, to one that was almost samba-like. The crowd were moving in their seats, naturally.

...aesthetically the sound was a hearty mix of soul jazz and contemporary composition, the group's welcoming attitude was a tribute to jazz's occasionally messy, brash and party-ready beginnings. A wah-wah pedal for a bowed upright bass solo? An onstage drum-off? It all fits with Washington at the helm. [The Guardian]

Jazz musician Kamasi Washington just wrapped up a two-night, four-show stand at the Blue Note in NYC on his ongoing tour. He had a massive band, including frequent collaborator Thundercat, as The Guardian's review quoted above points out. You can read the rest of that here and check out more some pictures below.

We recently mentioned his tour would have him back in NYC for CMJ show on October 15 at BRIC House (tickets), and he since added another NYC show. This one's at Le Poisson Rouge (10/16) the following day. Tickets are on sale now. Updated dates are listed below.

Kamasi Washington is a living legend.