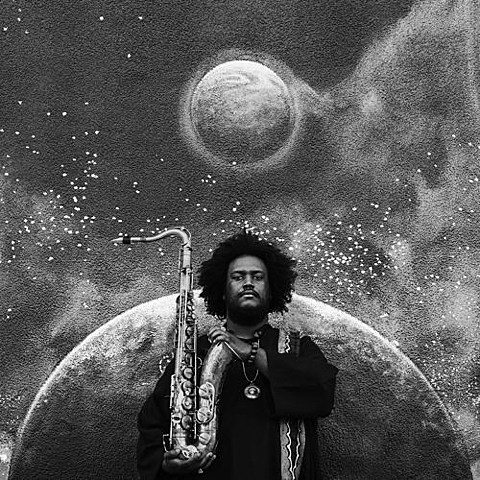 Jazz saxophonist/composer Kamasi Washington has been at it for over a decade -- early works include Young Jazz Giants, his quartet with Stephen Bruner aka Thundercat and others, who released a self-titled album in 2004 -- but he's been in the spotlight recently thanks to his contributions to Kendrick Lamar's To Pimp A Butterfly and his debut album as a bandleader, The Epic, which came out earlier this month on Flying Lotus' label Brainfeeder. (Thundercat appears on this too.) Pitchfork gave the album Best New Music and wrote:

It's something of a gobsmacking paradox to discover what a hip-hop-free zone The Epic is, and how enamored of jazz's past it turns out to be. This triple-album set is an extravagant love letter to (among other things): soul jazz, John Coltrane (various periods), and 1970s fusion leaders like Miles Davis and Weather Report. The Epic's Disc 1 opener, "Change of the Guard", might as well be titled "We Love All Kinds of 'Trane". Its ringing opening piano chords sound almost entirely lifted from the playbook of McCoy Tyner, the pianist in Coltrane's so-called "Classic Quartet." (That's the group responsible for A Love Supreme.) The opening theme in the saxes is something that could only have been written after "Impressions". And the harmonious writing for Washington's string section recalls posthumous Coltrane releases like Infinity--tracks from which featured orchestral overdubs supervised by Alice Coltrane (who is, as you may have read, Flying Lotus's aunt).

He performed the album live at the Regent Theater in LA the day before it came out, and tonight (5/27) at 9 PM EST, NPR will broadcast it for all to hear. HIs band at that show included Thundercat once again, arranger Miguel Atwood-Ferguson leading the orchestra and choir, and many more (LA Times has a good review). His only two upcoming dates at the moment are in LA and DC, but let's hope he makes it to NYC soon too.

Stream a track from the album and browse his tour schedule below...