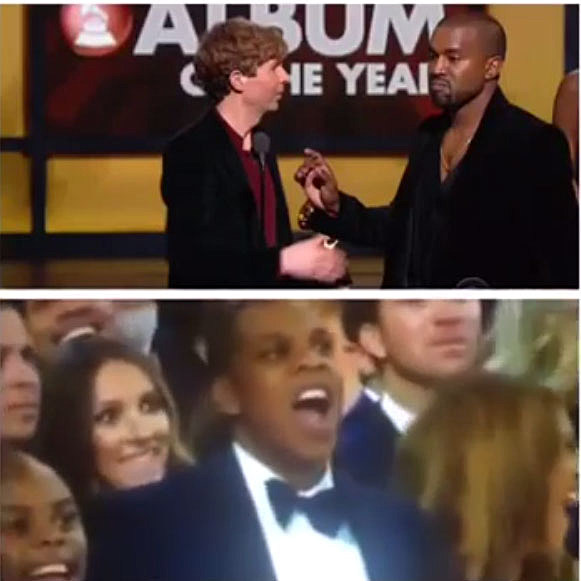 Though Kanye stopped himself during the Grammys (much to Jay-Z and everyone's amusement), he let his opinions be known right afterwards, live on TV with Kim Kardashian by his side. Watch the E! afterparty interview below...

"If they want real artists to keep coming back, they need to stop playing with us. Flawless Beyoncé video, and Beck needs to respect artistry and he should have given his award to Beyoncé. And at this point, we tired of it! Because what happens is, when you keep on diminishing art and not respecting the craft and smacking people in the face after they deliver monumental feats of music. It's disrespectful to inspiration. And we as musicians have to inspire people who go to work everyday, and listen to Beyoncé and they feel like it takes them to another place. Then they do this whole promotional event, and they'll run the music over somebody's speech, an artist, because they want a commercial advertising. No, we not playing with them no more. And by the way, I got my wife, I got my daughter, and my clothing line, so I'm not gonna do nothing to put my daughter at risk. But I am here to fight for creativity, that's the reason I didn't say anything tonight."
Later on, he paused to ask, "By the way, who designed these mics? I took the E! logo off his mic."

Kanye is now on his way to NYC for a big free sponsored show and Fashion Week.