Bruce at Hersheypark Stadium in May (more by Dana (distortion) Yavin) 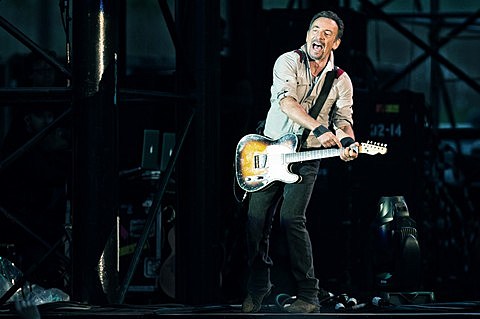 Yesterday's A-Trak show isn't the only NYC show happening in honor of World Aids Day. Tonight (12/1) there will be a show in Times Square with three of the four members of U2, minus Bono due to his recent injuries. In his place, Bruce Springsteen and Coldplay's Chris Martin will be fronting the band. Also performing their own sets are Kanye West and Carrie Underwood. Bono's organization (RED) is presenting the show.

It takes place at Duffy Square (on Broadway between 46th and 47th) at 7:30, and if you can't make it (or just don't want to deal with Times Square crowds), you can also stream it live HERE.

In related news, this Friday (12/5) PBS will air a Bruce Springsteen tribute at 9 PM EST which features footage of Neil Young, Elton John, Jim James, Mumford & Sons, Mavis Staples, Patti Smith, Alabama Shakes and others covering The Boss at the 2013 MusiCares Person of the year benefit. There also may or may not be a Bruce biopic on the way starring Brad Pitt.

And in more related news, there's a new fan-made video of footage from Kanye's Yeezus tour (made by John Colandra) which you can watch below...