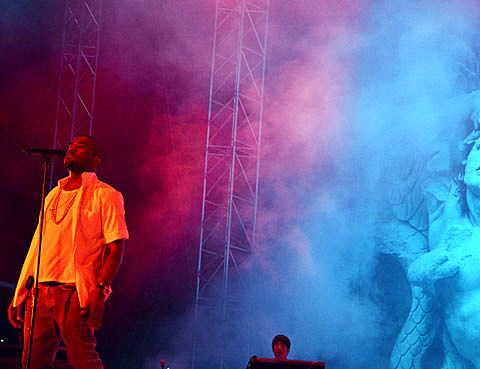 Kanye West just premiered the video for "Bound 2," the final track on Yeezus, during his appearance on The Ellen DeGeneres Show. The video features (a topless) Kim Kardashian and was directed by Nick Knight. You can watch it, along with his Ellen interview, below.

UPDATE: The uncensored version of the video is out now, and you can watch that below. NSFW obviously.

Kanye also just responded to president Barack Obama calling him a "jackass" during a 2009 Hot 107.9 interview. Via The Guardian:

On the "jackass" comment, Kanye admitted that "that's how the world felt," but that Obama shouldn't have responded negatively. "I don't care if somebody the President or not. I care about thoughts, and how you helpin' people, and what you bring to the world. My music brings joy to people. What I create brings joy to people, and I'm about people. Me, I'm not about me. I'm about, 'I got an idea that people gonna like.'"

Yeezy's tour begins its four-night run in NYC tonight (11/19) at Barclays Center. It also hits Barclays on Wednesday (11/20) and then MSG on Saturday (11/23) and Sunday (11/24). Tonight's and Saturday's shows are being opened by Kendrick Lamar, and Wednesday's and Sunday's shows will be the "final" shows for legendary group A Tribe Called Quest. Tickets for all four nights are still available.

In between those shows, you might run into him at a local Wendy's.

Ye also just spoke on Bret Eason Ellis' new podcast, which you can listen to here. New videos and updated list of tour dates below...

# with Kendrick Lamar
+ with A Tribe Called Quest