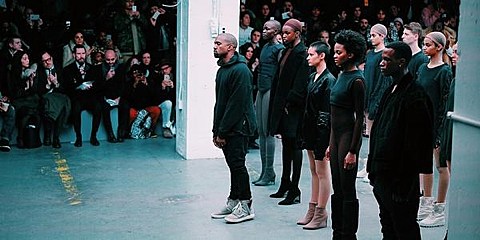 So far this year, Kanye West has released the Paul McCartney collaboration "Only One," the Macca/Rihanna collab, "FourFiveSeconds," and earlier today at the fashion show for his new Adidas shoe (part of the ongoing NY Fashion Week) he debuted another new song, "Wolves," featuring Sia, Vic Mensa and production by Cashmere Cat and Sinjin Hawke. It's said to be the first track on his upcoming album. Watch a video of the debut, below.

UPDATE: The full official video of the show is out now, and watchable below. "Wolves" starts at the 8:19 mark.

Kanye also appears on Big Sean"s new song, "All Your Fault," which a 30-second clip of was just released. Kanye produced it, along with Travi$ Scott (who recently expanded his tour with Young Thug). The song will appear on Big Sean's upcoming new album, Dark Sky Paradise, which is out on February 24 via G.O.O.D. Music/Def Jam. Kanye (and Drake) also appear on previous single "Blessings." Listen to that, and the "All Your Fault" clip, below.

Meanwhile, Kanye's NYC show for NBA All-Star Weekend is TONIGHT (2/12) at 8 PM outside Madison Square Park. If you didn't get in, you can stream it live. UPDATE: It happened.