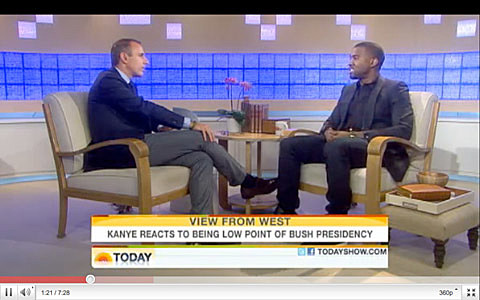 Kanye West recently responded on the Today show to George Bush's reaction to West's infamous "George Bush hates black people" tirade on national television in the wake of Hurricane Katrina. View his response below. And as Matt points out at the end of the video, Kanye is set to play a live show outside the Today Show, on the plaza, on November 26th (the day after Thanksgiving) (if he doesn't cancel).

Kanye isn't afraid to return the favor either, as he appears on Kid Cudi's spankin' new LP, Man on the Moon II: The Legend of Mr. Rager (out now) (NME gave it a 9/10, Rolling Stone gave it 2.5/5 stars, Pitchfork hasn't reviewed it yet though they did give Cee Lo's new one a 7.3 today). Kanye joins a list of collaborators that includes Cee-Lo Green (who plays a NYC show Saturday), Mary J. Blige, GLC, Cage and St. Vincent, the latter two of which appeared on his latest single "Maniac". Both Cage and St. Vincent appeared on Late Night with Jimmy Fallon with Kid Cudi on 11/3, and you can check out video of that performance below too...

--
Kanye West Responds to George Bush on the Today Show