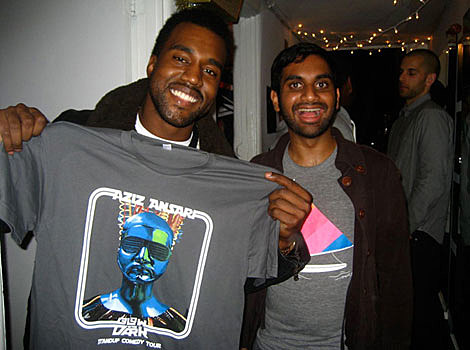 "I WENT TO THE AZIZ GLOW IN THE DARK TOUR AND IT WAS AMAZIIIING!!! OH AND I EVEN GOT TO MEET HIM!!!!" [Kanye West]

That's awesome that Kanye got to meet Aziz. I wonder if he got to meet Obama last night when he played at one of his many inauguration parties...

Opening the show from the Hilton Washington, the night's host, Sway, reminded everyone that after what was sure to be an exhausting first day, it was time to celebrate President Barack Obama's historic inauguration.

Kanye West kicked off the show with a medley of hits like "Touch the Sky," "Stronger" and "Good Life." "Let's make some noise for our new president, Obama," he told the crowd. "It feels so good to be standing here. My mama would be so proud to see her baby boy with the #1 song in the country and our new African-American president."

Later in the night, he joked, "I still can't believe it. I feel like I'm in the future -- first iPods, now this!"

All Kanye-related accolades aside, the night really belonged to President Barack Obama, who dazzled the 7,000 party goers with a heartfelt speech about how thankful he is for the work the young people put in to get him elected. [MTV]

Aziz Ansari's Glow in the Dark tour came through NYC earlier this month. He played four shows at Comix. Before the shows, Aziz was telling Gothamist about how much he loves to read Kanye West's blog, so he is surely pretty excited about the post.