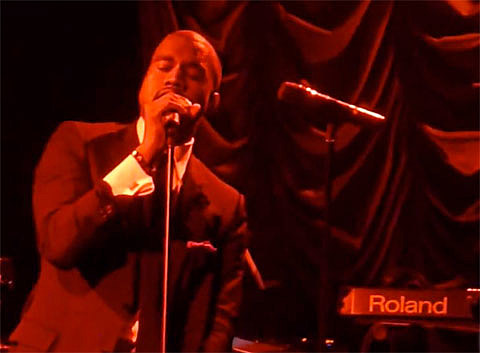 Kanye West popped into the 200 capacity club The Box on the LES last night for a 1:30 AM surprise set:

An e-mail went out to a select group late Thursday evening, alerting recipients that West and John Legend would be holding a function. If not quite a black-tie affair, the invite asked guests to be suited and booted. No exceptions. Also noted in the message was a phone number to call to learn the address of the venue, which was Manhattan's Chrystie Street club, the Box. The stage set-up was pretty simple: a baby grand piano at which Legend sat, two microphones (one just for Auto-Tune), an 808 beat machine and a keyboard. -[MTV]

The fully-suited Mr. West crooned through favorites like "Homecoming", "Flashing Lights", "Heard 'Em Say", "Love Lockdown", "Power," "Good Life", and "Can't Tell Me Nothing" and even ventured into new territory like "Moma's Boyfriend", an unheard Billy-Joel's-"Moving Out"-sampling track viewable in the video below. Besides John Legend, who contributed with his hit "Ordinary People", Estelle was in the house (and joined him for a rendition of "American Boy") as well as A-Trak, Consequence, and his "latest signing to G.O.O.D. Music" Pusha T (of Clipse).

Some video from the show (which was also an afterparty for Rihanna's MSG show), is below...

Kanye West - Say You Will Freestyle