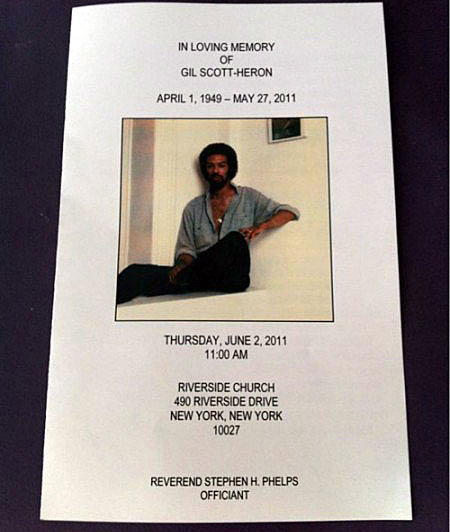 "Kanye West was among those who paid respect to spoken word artist and "bluesologist" Gil Scott-Heron, who passed away at age 62 last week, at a memorial service in Harlem's Riverside Church Thursday (June 2).

The service, which was open to the public, closed with West performing an Auto-Tuned yet emotional rendition of of "Lost In The World" -- the song from his latest album, "My Beautiful Dark Twisted Fantasy," and one that samples the refrain, "Who will survive in America?" from Scott-Heron's well-known poem, "Comment #1."

In addition to West, a trio of Scott-Heron's longtime backing musicians gave a spirited performance of the artist's songs "Better Days Ahead" and "The Bottle," while the audience clapped along." [Billboard]

The viewing is Friday.