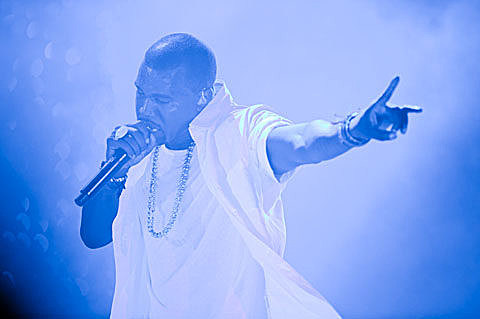 Kanye West will be coming to Atlantic City next month for shows at Revel Ovation Hall on July 6 and 7. Tickets for those shows go on sale Friday (6/22) at 10 AM with an AmEx presale starting Wednesday (6/20) at 10 AM. They're his only North American dates announced at the moment.

In related news, Kanye's G.O.O.D. Music group is putting out a compilation album this year which is set to feature Pusha T, Frank Ocean, Jay Electronica, 2 Chainz, Big Sean, and more. They recently dropped a video for the track "Mercy," with Kanye, Pusha T, Big Sean, and 2 Chainz. You can watch that below. G.O.O.D. Music are set to make their debut television performance on the BET Awards on July 1.

Meanwhile, Kanye has been on tour in Europe with Jay-Z and Rap Radar reports that last night (6/18) in Paris they broke their record of amount of times playing "Niggas in Paris" at one show, performing the song a dozen times. (Is anyone else besides Kanye vying for this record?) You can check out a video of this below.