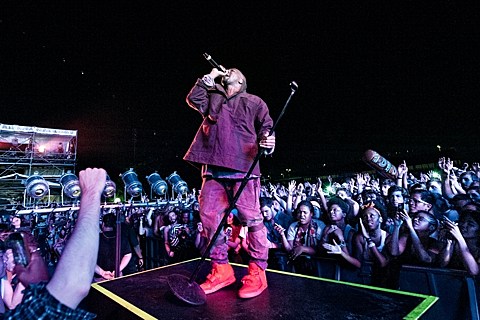 Kanye West wrapped up this year's muddy, yet successful, Governors Ball on Randall's Island with an epic headlining set on the main stage (6/9). If you weren't close to the stage, it was hard to see him, but that didn't even matter because his elaborate light/visual show was a huge spectacle on his own. He had multiple layers of lights across the back end of the stage, and the screens were back and forth between showing ominous images and distorted shots of Kanye performing on stage. He didn't get as crazy as he has in the past with a rant, but he did go on a short one in the middle of "Clique" about how he doesn't care about radio or trying to sell a million records anymore, he just cares about music.

In addition to playing the hits, Kanye also played material off of his upcoming new album, Yeezus, including "Black Skinhead" and "New Slaves," which he did on SNL, and three others, one possibly named "On Site" and another possibly named "I Am A God." Check out videos of him playing all five new songs, along with his full Governors Ball setlist, below. More pictures (like the one above) coming soon.