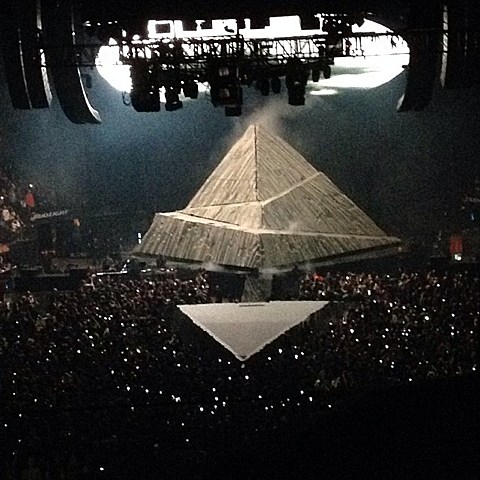 Kanye West just wrapped the 4-night NYC runYeezus tour at MSG last night (11/24) with legendary rap group A Tribe Called Quest opening, and billing it as their "final" show. The run also included another show with Tribe last Wednesday (11/20) at Barclays Center and two with Kendrick Lamar -- 11/19 at Barclays and Saturday (11/23) at MSG.

It was Kanye's second live appearance(s) in NYC this year, after having headlined Governors Ball back in June. His GovBall set was an incredibly elaborate affair, with a massive light show and intense on-screen footage that was more about the overall audio/visual experience than it was "a concert." And last night's MSG show was a similar experience, but a totally different delivery. Instead of video clips, Kanye was backed by a giant 3-dimensional pyramid, a "sky" screen above it, and a silent group of "dancers" who looked more like a cult-ish or religious group than dancers. The setlist was super heavy on Yeezus early on, playing most of the older hits towards the end, but it was those dark, abrasive moments of the new album mixed with the ominous stage show that really made it an unforgettable experience. That, and of course, Kanye's nightly rant, which this time was about how "nobody says anything bad about Lenny Kravitz," how terrible the fashion industry is, and about not letting your ego get to your head too much.

During A Tribe Called Quest's set, like he did at Barclays Center, Busta Rhymes came out during "Scenario" which got him and Tribe a standing ovation. Busta and ATCQ's Q-Tip have a collaborative mixtape, The Abstract & The Dragon, coming out on December 12, and they just made a video for its single "Thank You," which features Kanye, in addition to Lil Wayne. A$AP Ferg, A$AP Nast, and Tristan Wilds make cameos in the video, but aren't on the song. Check it out below.

And in more related news, James Franco and Seth Rogen decided to make their own version of Kanye's "Bound 2" video, which you can watch, along with a couple videos from MSG (including a "rant" video) and Kanye's setlist, below...

Kanye West at MSG - 11/24/13 Setlist: (via)
On Sight
New Slaves
Send It Up
Mercy
Power
Cold (Intro was "Cold As Ice" by MOP)
I Don't Like (Chief Keef cover)
Clique
Black Skinhead
I Am a God
Can't Tell Me Nothing
Coldest Winter
Hold My Liquor
I'm In It
Guilt Trip
Heartless
Blood on the Leaves
Lost in the World
Runaway
Stronger
Through the Wire
Jesus Walks
Diamonds from Sierra Leone
Flashing Lights
All of the Lights
Good Life
Bound 2