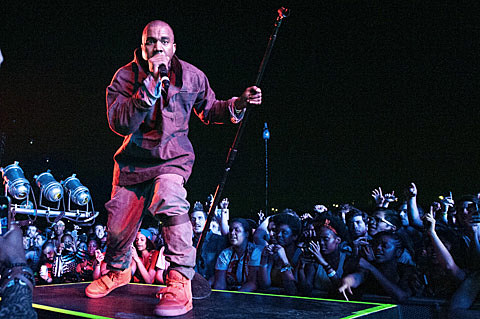 The NBA All Star Weekend happening in NYC next week is also meaning lots of crazy (and not always public) events for music fans in the city. We already mentioned that Win Butler, Common and others are playing a celebrity all-star game and Drake and Nas are playing Irving Plaza, and now we've learned another rapper, Kanye West, will be putting on a free performance in the city.

He's co-hosting it with OKC Thunder player (and Roc Nation Sports signee) Kevin Durant on February 12 outside of Madison Square Park at 6 PM. The only way to get in, though, is to win tickets. You can enter via co-presenters Roc Nation or Power 105.1 FM's contests or follow both on Twitter. As HipHopWired points out, you can also text "BOLDMOVE" to 95577 to win tickets from presenting partner Sparkling ICE.

That same week is Fashion Week in NYC, and Kanye will be doing something for that too. Fashionista reports that he's planning to present his upcoming Adidas collaboration in NYC that week:

West has repeatedly stated that Adidas has put trust in his talents and has given him the creative freedom he needs to truly shine -- take that, Nike -- which is why we were pretty excited when rumors started spreading around the Internet that he would be unveiling his collection for the sportswear brand with a presentation at New York Fashion Week. According to Complex, invitations to the event (which will reportedly take place on Feb. 12) have already been sent out, and the site referenced a (now-removed) Instagram screenshot of an e-mail sent to menswear buyer Ramon Ehlen as proof.

Sooner than that, he'll be in LA to perform at the Grammys with Paul McCartney and Rihanna. He's also launched a mysterious website with a countdown clock (six days and counting as of this posting, we'll see).