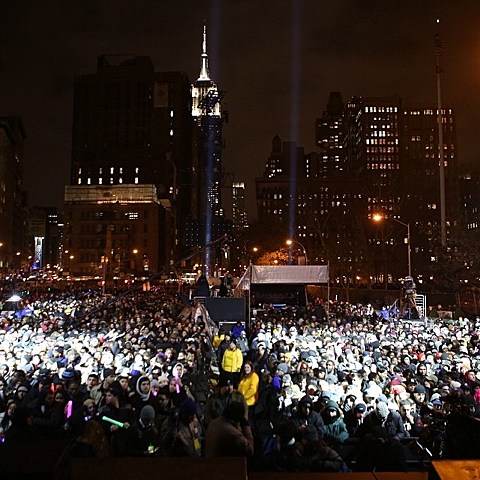 Kanye West's concert at Madison Square Park Thursday night drew in thousands of fans and spectators, despite the backlash from Flatiron community and business leaders.

A long line of concertgoers had to go through three blocks of barricaded streets to get to the free show at Flatiron Pedestrian Plaza inside Madison Square Park. The 37-year-old rapper's fans braved the freezing temperatures and the small green space and were thrilled with a big screen, bright lights and plenty of tunes.

...The packed show worried Community Board 5 and Manhattan Borough President Gale Brewer, who pushed the city to reconsider holding the concert at the park. Brewer said she couldn't fathom why Roc Nation, Jay Z's media company which produced the show, didn't stage the concert at a bigger outdoor space such as Times Square.

Some of the concertgoers said they had no problem with the tighter quarters of Madison Square Park, however. [AMNY]

Kanye West had a pretty eventful Thursday. Earlier in the afternoon, he debuted a new song "Wolves" at the fashion show for his new Adidas line, and then at night he played the first annual Roc City Classic at Flatiron Pedestrian Plaza, which Kevin Durant co-hosted. As you can see in the picture above, it was packed. Were you one of the people in attendance? If not, did you stream it online?

'Ye didn't play "Wolves" at the show, but he did close the set with his recent Paul McCartney collaboration "Only One." He brought out his G.O.O.D. Music pals Travi$ Scott, 2 Chainz, Pusha T and Big Sean, and did a handful of their songs too. The show opened with three Travi$ Scott/2 Chainz songs, and later on they included Big Sean's recent Kanye-featuring single, "Blessings," Sean's huge hit "I Don't Fuck With You," posse cuts "Don't Like" and "Clique," and more. He also brought out rising Paterson, NJ rapper Fetty Wap (who also opened for Meek Mill at Best Buy Theater the same night) for his buzzy "Trap Queen." "I wanna bring out a special guest. Young new artist, my favorite song out," he said. Jay Z and Beyonce must like it too, since they were in the crowd dancing to it, as you can see in a short clip below.

Travi$ Scott also recently expanded his tour with Young Thug and is on the surprise new Drake album. Drake plays an NBA All-Star Weekend show too (with Nas).

Full setlist, a few more pictures and videos, and the "Wolves" video ICYMI, also below...

I may not be the best ... you may not like my music but you won't ever forget "Fetty Wap" s/o to Hov x 🐝👑 @beyonce for rockin with me at Rock City earlier tonight 💯