"Ratner - Hands Off Our Homes" (horseycraze) 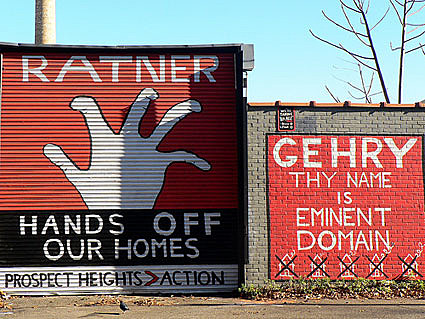 WHAT:
The Brooklyn Ball will celebrate the opening of © MURAKAMI, a major retrospective exploring the accomplishments of artist Takashi Murakami. The celebration will also honor the Chairman and Chief Executive Officer of the Forest City Ratner Companies, Bruce Ratner, with the Museum's highest honor, the Augustus Graham Medal. Louis Vuitton will be opening a fully operational store within and as part of the © MURAKAMI retrospective that will carry products created by the artist, as well as editioned canvases specifically created for the Brooklyn presentation, which will be available exclusively at the Museum for the duration of the exhibition (April 5-July 13, 2008).

The evening will feature a special one-night-only Louis Vuitton performance in support of the protection of intellectual property. This performance is an unprecedented and daring way to bring attention to the serious issue of counterfeiting and our global responsibility to protect artists and designers' creativity and creations. Louis Vuitton plans to donate a portion of the revenues generated at the Louis Vuitton store within the Brooklyn Museum on the evening of the Gala to the Federal Enforcement Homeland Security Foundation. There will also be special items, created by Takashi Murakami as part of the latest collaboration with Louis Vuitton, which will be auctioned during the Gala dinner to benefit the Brooklyn Museum.

The event will also feature an exclusive performance by Grammy award-winning producer and artist Kanye West.