"Great show. Though, totally unnecessary 3+ hour wait to get in." - Anonymous 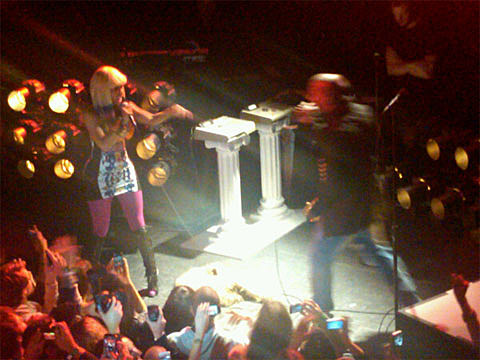 Kanye West played his entire new album My Beautiful Dark Twisted Fantasy from start to finish, followed by a four song encore Tuesday night at the intimate Bowery Ballroom in NYC where Kanye literally brought in "all of the lights" (there were lots of lights). The show started with people who weren't Diddy (he walked right in) waiting on a long line. The show ended with Kanye going on a rant about racism, George Bush, Taylor Swift, the Today Show, etc. Audio of that final portion can be streamed below.

Album guest stars Kid Cudi, Raekwon, Jay-Z and RZA were nowhere to be found, but Terena Taylor, Bon Iver aka Justin Vernon (who might appear again with Kanye in the Thanksgiving Day Parade), Rick Ross, Nicki Minaj (who plays Hammerstein Ballroom on Thanksgiving), Pusha T, Prynce Cy Hi, Swizz Beatz, and John Legend (whose friend Questlove was in the balcony taking pictures) all performed at the show that started around 12:40am and was was over by around 2:15. Full setlist, videos and that audio below...

---
audio of Kanye on Taylor Swift and Bush @ Bowery Ballroom. (via Brian Hiatt)

Kanye West - "ALL OF THE LIGHTS" at The Bowery Ballroom

Encore:
Christian Dior Denim Flow
Can't Tell Me Nothing
Paranoid
The Good Life
(and then a rant)