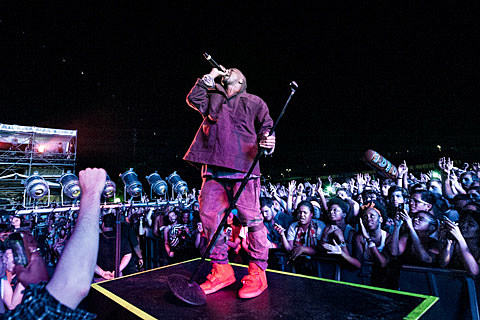 We were just saying in today's rap roundup that Kanye West is supposedly releasing a new song every Friday starting today (1/8) ahead of his new album, Swish. So far it's looking true: he just released the new song "Real Friends" and a clip of another called "No More Parties in LA." The former features Ty Dolla $ign and was produced by Kanye (with samples of Frank Duke and Boi-1da), and the latter features Kendrick Lamar and was produced by Madlib. Complex points out that the Madlib collaboration dates back to the My Beautiful Dark Twisted Fantasy sessions.

Like "Facts" suggested, "Real Friends" still sounds like he's loving that Drake & Future album, but plenty of the rapping (and lyrical content) could only come from Kanye West. The beat is pretty fantastic too. It was uploaded to Soundcloud and soon deleted, but someone ripped it and you can listen to that below.

Kanye was also just announced as a Governors Ball 2016 headliner, and Kendrick also just debuted his own great song.

UPDATE: Kanye clarifies on Twitter: "Un moment, there was a slight distortion in the main loop within Real Friends. It will be back up shortly. When it's back up all rippers please rip the new one instead."

UPDATE 2: It's back up, and you can listen below. Kanye says: "New version is up. Please please erase the old one I wasn't satisfied with the sound quality. I hope you have a nice weekend."

UPDATE 3: He tweeted that Swish comes out February 11!